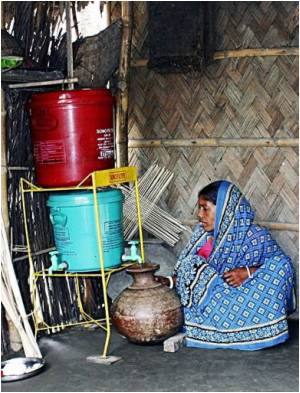 Genetic variants that elevate the risk for skin lesions in people chronically exposed to arsenic were found in one of the first large-scale genomic studies conducted in a developing country.

Genetic changes found near the enzyme for metabolizing the chemical into a less toxic form can significantly increase an individual's risk for developing arsenic-related disease.

The discovery could point the way to new screening and intervention options for people who are exposed to groundwater with high levels of arsenic, said scientists at the University of Chicago Medicine, Columbia University, and in Bangladesh in a study published in PLoS Genetics.


"These results add clarity to the genetic architecture that is playing a role in arsenic toxicity and its underlying biology," said senior author Habibul Ahsan, MD, MMedSc, Louis Block Professor of health studies, medicine and human genetics at the University of Chicago Medicine. "It's a rare type of study for a major problem affecting millions of people around the world, and it opens up opportunities for genetic studies of other major public health problems in developing countries."

Genetic testing helps to confirm a genetic condition in an individual and involves q complex laboratory techniques
Advertisement
The group's genome-wide association study, or GWAS, was conducted in nearly 3,000 individuals exposed to arsenic for decades in Bangladesh. Since the widespread installation of hand-pumped wells to tap groundwater sources in the 1970s, as many as 77 million people - about half the population of Bangladesh - have been accidentally exposed to dangerous levels of arsenic. The World Health Organization calls the exposure "the largest mass poisoning of a population in history."

For more than a decade, Ahsan and colleagues have studied the epidemiology of arsenic-related disease, such as skin lesions, diabetes, and respiratory illnesses, in this population, as well as the effectiveness of interventions to prevent toxicity. In the new study, funded by the National Institute of Environmental Health Sciences and the National Cancer Institute, the researchers sought genetic answers for why some individuals appear to be at higher risk for developing disease after arsenic exposure.

"Whatever the source of exposure, different individuals vary with respect to their susceptibility to the toxicity of arsenic," Ahsan said. "Even if they consume or are exposed to arsenic at the same dose and duration, some individuals will manifest toxicity phenotypes and others won't."

Researchers genotyped thousands of arsenic-exposed individuals from the group's main studies for single nucleotide polymorphisms (SNPs) throughout the genome, and looked for associations with arsenic metabolite levels and risk of skin lesions.

After ingestion, the body metabolizes inorganic arsenic into first monomethylarsonic acid (MMA) and then dimethylarsinic acid (DMA). MMA is considered to be more toxic, while DMA is water-soluble and more easily excreted. Higher levels of DMA or lower levels of MMA measured from an individual's urine are associated with lower toxicity.

A research team led by Ahsan and Brandon Pierce, PhD, an assistant professor of epidemiology at the University of Chicago Medicine, then used GWAS to search for SNPs associated with DMA and MMA levels. They found several significant genetic variants in the region of a likely candidate gene: arsenite methyltransferase (As3MT), an enzyme critical for arsenic metabolism. A second GWAS looking for SNPs associated with the development of skin lesions after arsenic exposure, pointed to many of the same variants. In a further study of gene expression levels, those same SNPs were associated with reduced expression of the arsenic metabolizing enzyme.

"This makes perfect sense," Ahsan said. "It gives us a very coherent story that we can now investigate in relation to other arsenic pathologies and in relation to a wide range of arsenic doses in this population."

"Now that we understand the molecular basis of some of this disease risk, it is conceivable to now think of incorporating this information into testing, evaluating, or potentially coming up with successful biomedical interventions," Ahsan continued. "By exploiting these metabolic pathways for a subgroup of individuals who will really be at higher risk for getting those diseases, we may be able to reduce fatal outcomes in this population."

The genetic findings provide strong evidence that efficient metabolism of arsenic through methylation protects against the toxin. Compounds that boost methylation, such as folic acid, could reduce arsenic toxicity - a strategy currently being tested by co-author Mary Gamble, PhD, associate professor of Environmental Health Sciences at Columbia University.

"If we could somehow find a way to do that in Bangladesh, it would make individuals much better methylators of arsenic, and as this current study shows if you're a better methylator you're at a lower risk for disease," said co-author Joseph Graziano, PhD, Professor of Environmental Health Sciences and Director of Superfund Research Program at the Mailman School of Public Health of Columbia University.

Beyond the clinical applications, the current study demonstrates that large-scale genomic studies are possible in a largely rural population of a developing country. The study offers a rare example of a GWAS result with clear, immediate potential for translational impact.

"Many genomic signals that we see are not robust enough or do not pertain to a large population," Ahsan said. "But in this study, that is not the case. The finding is robust, and the impact is massive."
Source: Eurekalert

In the recent years 'epigenetics' represents inheritable changes in gene expression that do not include DNA alterations.
Advertisement