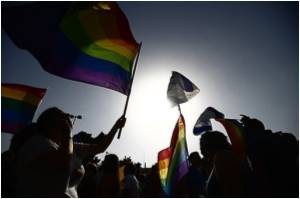 Gays and lesbians are pushing for an end to discrimination and for civil rights such as same-sex marriage in Venezuela.

"In some areas of the capital, two men cannot be seen holdings hands without security ushering them out," said Cesar Sequera, who leads Diverse Venezuela, among marchers waving signs like "Say yes to inclusion."


Sequera said the dozens taking part in the protest wanted to see the end of persecution of lesbians, gays and transsexuals in Venezuela -- and were seeking the legalization of same-sex marriage.


Bills seeking more rights for gays and lesbians have been "blocked by the religious fundamentalism which holds sway in the National Assembly," he said of the socialist government's main legislative force in the legislature.

But gay marriage has not come before lawmakers in the South American nation.

Uruguay's legislature voted last month to allow same-sex marriages nationwide, making it only the second Latin American country to do so.

Argentina approved gay marriage in 2010. Same-sex marriage has been permitted in Mexico City, but not the rest of the country, since 2009.