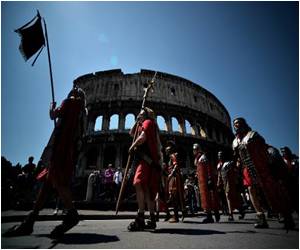 Women with flowers in their hair, gladiators and horsemen brought history alive on Monday at Rome's Circus Maximus as thousands gathered to celebrate the Eternal City's 2,767th birthday.

The event involving some 1,600 actors, which coincided with a sunny Easter Monday this year, is a major draw especially for tourists intrigued by Ancient Rome.

Gladiators did battle and women in period costume danced in the streets along a parade route across central Rome in the event organised by the Roman Historical Group.


Legend has it that the first king of Rome was Romulus, who founded the city on April 21 in 753 BC after a deadly dispute with his twin brother Remus.

Roman Gladiator School on Banks of Danube in Austria Recreated Virtually by Archaeologists
Making use of sophisticated techniques, a group of archaeologists has virtually recreated a Roman .....

Bee Medicine Still Alive in Romania
The bee has been in use since ancient times and is still playing a key role in dealing with ......

Eastern Europe Reeling as Massive Logging Leaves Deep Scars
The Pojarna Valley in Romania once looked like a postcard landscape, but illegal logging has turned ...