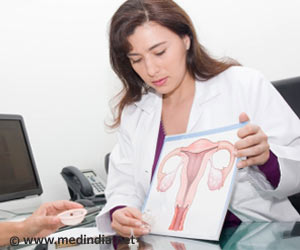 A new study from researchers at Henry Ford Hospital in Detroit says that the risk of uterine cancer recurrence may be increased by waiting too long after a hysterectomy to begin radiation therapy.

The study shows that for patients with uterine cancer not receiving chemotherapy, tumors were more likely to return if radiation therapy was delayed nine weeks or longer following surgery, with only 43 percent having relapse-free survival after five years.

Uterine Cancer or Cancer of the Uterus (or Endometrial Cancer) refer to cancers affecting the uterus or the womb in women. Learn about the different types of uterine cancer, symptoms, staging, diagnosis, prognosis, treatment, survival rates and news on uterine cancer.
Advertisement

By comparison, patients starting radiation treatment soon after surgery had a five-year relapse-free survival of 90 percent.


"Our data suggests that a shorter interval of time between hysterectomy and start of radiation treatment may be beneficial for patients," says lead author Mohamed Elshaikh, M.D., senior staff physician in the Department of Radiation Oncology at Henry Ford Hospital.

Dysmenorrhea, menstrual cramps or painful periods is the commonest menstrual disorder. The causes are varied. Treatment aims at providing pain relief.
Advertisement
Study results will be presented Tuesday, Oct. 30 at the 54th Annual Meeting of the American Society for Radiation Oncology (ASTRO) in Boston.

Endometrial cancers mainly arise from the tissue lining the uterus. They are the most common gynecologic cancers in the U.S., with more than 43,000 women diagnosed and an estimated 7,950 dying from the disease in 2010, according to the National Cancer Institute.

A total hysterectomy (surgical removal of the uterus) is the most common approach for treatment of endometrial cancers.

To assess the impact of time between hysterectomy and the start of radiation treatment on tumor recurrence, Dr. Elshaikh and his colleagues conducted a retrospective study of patients who underwent surgery for uterine cancer between 1988 and 2010.

Of the 1,450 Henry Ford patients reviewed with stage I-III uterine cancer, 308 received radiation therapy without chemotherapy after hysterectomy with at least one year follow-up. The median age for patients was 65 and the median follow-up was six years.

Among the study group, there were 43 cases where the cancer returned. Tumor recurrence was significantly associated with treatment delay of nine weeks or longer.

Uterine fibroids are non-cancerous tumors that take origin from the myometrium and the neighboring tissue of the uterus. Uterine fibroids cause abnormal vaginal bleeding and pelvic pain.
Advertisement
<< Risk of Treatment Failure and Death Increased If There is D...
Quality of Life is Good for Living Donors Following Liver T... >>