As the lights dimmed and the Iraq National Theatre's curtain rose to a wave of applause, six men in garish white suits and three rather more soberly-dressed women started to dance and sing a love song.

The play, "To enjoy the sweetness you must taste the bitterness," produced, written, directed and acted by Iraqis, is the first evening stage show in Baghdad since the war that toppled Saddam Hussein six-and-a-half years ago.

Iraq kicked off its first-ever international flower festival on Wednesday with the hope of showing the world that peace is blossoming after the winter of a long war.
Advertisement 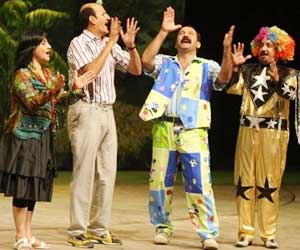 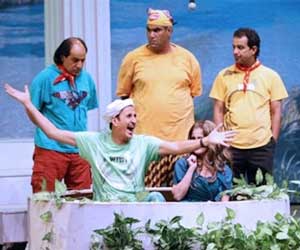 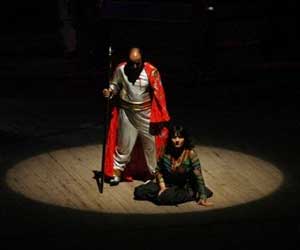 The 1,000 seat theatre is once again full

Although it is a comedy, the title and story have an obvious and serious resonance for people who long for better times. The 1,000 seat theatre, built during the Iran-Iraq war and which in its heyday hosted sell-out foreign productions of Shakespeare and Chekov, is, once again, full.


As nervous ushers handed out white plastic garden chairs to customers who had paid 10,000 Iraqi Dinars (8.7 dollars) for seats, only to be left standing, the significance of the night time performance was not lost amid the hubbub.

Iraq's cabinet has approved a draft of the war-torn country's first laws to restrict smoking and to halt cigarette advertising, the government said on Thursday.
Advertisement
"We used to go to the theatre and cinemas all the time before the war," says Elaf Mohammed, a 29-year-old civil engineer accompanied by her husband Usama and three year-old daughter. "It is so good that we can do so again."

Until little more than a year ago, going to a restaurant, one of the few evening diversions available in Baghdad, would have been considered dangerous. Downtown neighbourhoods such as Karrada and Mansur would have been empty by 6pm. Now they are bustling.

"Life must go on," Elaf says, in a sentiment shared by Usama, whose face bears the scars of debris that struck him when a massive truck bomb killed dozens and wounded hundreds at Baghdad's foreign ministry just seven weeks ago.

"People used to be scared to go out at night," he says. "I feel happy this has changed. Baghdad is a big city and we need to enjoy culture."

While the Baghdad cinemas that once showed international and Arabic films remain closed, bar a few matinee screenings, it is a sign of progress, perhaps, that families have the option of going to the theatre in the evening.

The play's actors, most of them stars of local television shows, include Majid Yassin, a veteran performer who fled Iraq after the 2003 US-led invasion ushered in bombings, kidnappings and sectarian murder that eviscerated society, but who has since returned.

"The hearts of Iraqis are full of hurt, you can see their pain from the outside. People have been used to crying," he says.

"My colleagues and I perform so that we can make them laugh again."

The play opened during Eid al-Fitr, the Muslim holiday that follows the holy month of Ramadan, and was the idea of producer Essam al-Abassi who, when not devising productions, sells mobile phones in the Iraqi capital.

Centred on two friends who quarrel when one falls in love with the other's sister, the plot contains an element of science fiction when a spaceship uplifts the men to Neptune, forcing them to put aside their differences.

The play is passionately patriotic and although it does not explicitly refer to the sectarian divide between Shiites and Sunnis, Abassi concedes that the gulf between Iraq's two dominant communities did inspire him.

"I am trying to send a message to the people that in the end there are no differences," he says.

"The two friends begin to forgive each other -- such is their need to get home, and the bond of their friendship becomes strong again," he adds.

The theatre at Fatah Square in Karrada is protected by blast walls while police are deployed in large numbers in surrounding streets during and after performances.

But although the theatre-goers are not exempt from the vehicle searches and security checks that pervade daily life in Baghdad, the fact that the city is hosting evening shows at all is progress, according to director Ghanim Hamid.

"Things are undoubtedly better security-wise," he says. "People can finally come out and enjoy themselves in the evening. The main problem, for us, is that there is not much money around to stage productions that we can be proud of."

Culture Minister Maher Ibrahim al-Hadithi admitted in June that his 85-million-dollar budget was "miserable" and that the ministry's infrastructure and resources had all been looted or destroyed in recent years.

To ordinary people, however, things could be much worse.

For Khalid Ahmed, a bus driver from Adhamiyah, the Baghdad Sunni district that witnessed the last public appearance of Saddam before the city fell, an evening at the theatre is a welcome boost for his wife and three children.

"I passed the theatre in my car the other day and I saw a poster advertising the play, so I thought I'd take the family," he says.

"We have become used to spending so much time in the house. At least now we have an option."

Councillors in Iraq's most revered holy Shiite city of Najaf on Saturday banned the sale and consumption of alcohol throughout the province, saying its use was incompatible with Islam.
Advertisement
<< Cycling at Relaxed Pace too Has Immense Health Benefits
WWF Opts For Saving Forests Over Carbon Capture To Stall Cl... >>