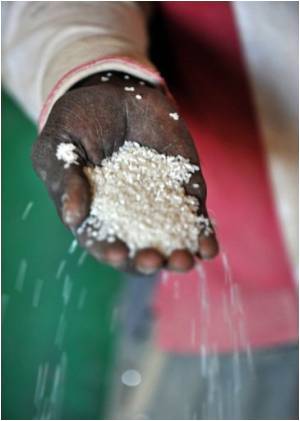 The entire genome of the African rice has been sequenced by researchers in an attempt to solve global hunger challenges.

The researchers led by the University of Arizona found the genetic information which will enhance scientists' and agriculturalists' understanding of the growing patterns of African rice, as well as enable the development of new rice varieties to eradicate food crisis.

Lead researcher Rod A. Wing, director of the Arizona Genomics Institute said that rice is the most important food crop as it feeds half the world, making it the key to solving the "9 billion-people question", which refers to predictions that the world's population will increase to more than 9 billion people by 2050, with many people living in areas where access to food will be extremely scarce.


Judith Carney, author of 'Black Rice' which describes the historical importance of African rice, brought to the United States during the period of transatlantic slavery, said that African rice is once more at the forefront of cultivation strategies that aim to confront climate change and food availability challenges.

The paper, 'The genome sequence of African rice (Oryza glaberrima) and evidence for independent domestication' was published online in Nature Genetics.

Rice bran oil is a unique cooking oil and has been in existence since quite some time now. According to nutritionists, it ranks as one of the best cooking oils for heart health.
Advertisement
<< New Vision-Correcting Display may Put Glasses, Contact Lens...
Blood Sugar Levels Impact the Brain's Response to the Sight... >>

Turmeric Powder - Health Benefits, Uses & Side Effects Post-Nasal Drip The Essence of Yoga Iron Intake Calculator Find a Hospital Blood - Sugar Chart Blood Pressure Calculator Drug - Food Interactions How to Reduce School Bag Weight - Simple Tips Indian Medical Journals
This site uses cookies to deliver our services. By using our site, you acknowledge that you have read and understand our Cookie Policy, Privacy Policy, and our Terms of Use