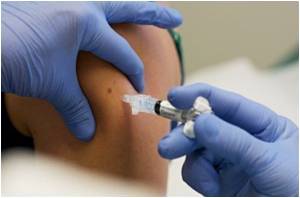 A vaccine which could work against all known flu strains has been successfully tested by Brit scientists the Guardian newspaper reported.

The new vaccine, developed by scientists at Oxford University, differs from traditional treatments by targeting proteins inside the flu virus rather than proteins on the flu's external coat.

The two proteins within the virus are similar across strains and less likely to mutate, meaning new vaccines would not have to be developed for each new strain of the illness.


Traditional vaccines stimulate the body to produce antibodies to fight the flu, whereas the new treatment, developed by a team led by Sarah Gilbert, boosts the production of T-cells, which identify and kill infected cells.

"We did get an indication that the vaccine was protecting people, not only from the numbers of people who got flu but also from looking at their T-cells before we gave them flu.

"The volunteers we vaccinated had T-cells that were activated, primed and ready to kill."

If successfully developed, the new vaccine could prevent outbreaks such as the recent swine flu pandemic, which cost the British government £1.2 billion in vaccine preparation.

Several drugs are either banned or withdrawn after introduction in the market.
Advertisement
<< Health Risk High in Rural Underage Binge Drinkers
Australia's Issue on Organ Transplants >>

Sinopril (2mg) (Lacidipine) Find a Hospital How to Reduce School Bag Weight - Simple Tips Indian Medical Journals Blood - Sugar Chart Post-Nasal Drip Diaphragmatic Hernia Blood Donation - Recipients Find a Doctor Iron Intake Calculator
This site uses cookies to deliver our services. By using our site, you acknowledge that you have read and understand our Cookie Policy, Privacy Policy, and our Terms of Use