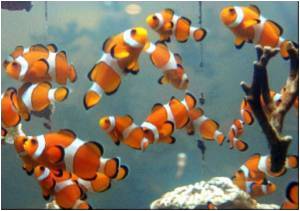 An Australian study says human beings are being poisoned by consumption of many reef fishes whose flesh is contaminated with toxins.

The illness called ciguatera leads to a painful and debilitating effects on our nervous system, stomach and heart lasting for months.

Thousands of fishes have been found dead in a lake in a village in southern India. The incident comes in the aftermath of a bitter battle over fishing rights.
Advertisement

A team of international marine scientists has reported a 60 percent increase in the incidence of cases of Ciguatera poisoning among people inhabiting Pacific Island nations.

Fishes Use Threat of Punishment in Mating Process

Australian marine scientists has found that fishes use the threat of punishment to keep would-be jumpers in the mating queue firmly in line and the social order stable.
Advertisement
Toxins produced by some microscopic algae known to cause harmful algal blooms, are found in reef fish, which poison humans who consume them, the journal Public Library of Science Neglected Tropical Disease reports.

Researchers investigating the medical records of Pacific Island countries have estimated that Ciguatera fish poisoning could have affected as many as half a million people over the past 35 years, making it a much more serious public health issue than previously thought.

"Within the 35 year period (1973-2008)...there was a clear increase in the incidence of ciguatera poisoning," researchers from ARC Centre of Excellence for Coral Reef Studies and James Cook University stated. They tracked down almost 40,000 cases in the 11 years to 2008.

Co-author Tom Brewer of the ARC Centre, says: "It all points to a pretty significant increase, and it makes Ciguatera more than just a minor health issue."

"While fatalities may be rare, ciguatera poisoning makes people dreadfully ill, so much so they often cannot earn a living for weeks or even months. So it has big social and economic implications. It also restricts the kinds of seafoods than can be eaten," according to an ARC statement.

The poison originates in particular dinoflagellates (any of numerous minute, chiefly marine protozoans) which grow on, or in the vicinity of sea weeds that are replacing coral reefs across the Pacific as the corals are stressed by human impacts including increased nutrients from land and ocean warming.

Consumed initially by small herbivorous fish and invertebrates, the toxin then works its way up the marine food chain, making big predatory reef fish the most risky for humans to eat.

Males and females of cichlid fishes exhibit differences in seeing things, especially in choosing their mate.
Advertisement
<< Formula to Predict Future Success of Budding Scientists
Genes That Give Flu Viruses Power to Cause Pandemics Detect... >>