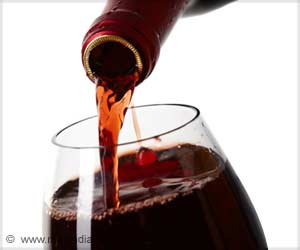 Antioxidant resveratrol in red wine was found to preserve muscle mass and strength in rats exposed to the wasting effects of simulated Mars gravity, stated new study published in Frontiers in Physiology. Mars is about 9 months from Earth with today's tech, NASA reckons. As the new space race hurtles forward, Harvard researchers are asking: how do we make sure the winners can still stand when they reach the finish line?

Out in space, unchallenged by gravity, muscles and bones weaken. Weight-bearing muscles are hit first and worst, like the soleus muscle in the calf.


"After just 3 weeks in space, the human soleus muscle shrinks by a third," says Dr. Marie Mortreux, lead author of the NASA-funded study at the laboratory of Dr. Seward Rutkove, Beth Israel Deaconess Medical Center, Harvard Medical School. "This is accompanied by a loss of slow-twitch muscle fibers, which are needed for endurance."
Advertisement
To allow astronauts to operate safely on long missions to Mars - whose gravitational pull is just 40% of Earth's - mitigating strategies will be needed to prevent muscle deconditioning.

"Dietary strategies could be key," says Dr. Mortreux, "especially since astronauts travelling to Mars won't have access to the type of exercise machines deployed on the ISS."

A strong candidate is resveratrol: a compound commonly found in grape skin and blueberries that has been widely investigated for its anti-inflammatory, anti-oxidative, and anti-diabetic effects.

"Resveratrol has been shown to preserve bone and muscle mass in rats during complete unloading, analogous to microgravity during spaceflight. So, we hypothesized that a moderate daily dose would help mitigate muscle deconditioning in a Mars gravity analogue, too."

To mimic Mars gravity, the researchers used an approach first developed in mice by Mary Bouxsein, PhD, also at Beth Israel Deaconess, in which rats were fitted with a full-body harness and suspended by a chain from their cage ceiling.

Thus, 24 male rats were exposed to normal loading (Earth) or 40% loading (Mars) for 14 days. In each group, half received resveratrol (150 mg/kg/day) in water; the others got just the water. Otherwise, they fed freely from the same chow.

Calf circumference and front and rear paw grip force were measured weekly, and at 14 days the calf muscles were analyzed.

Resveratrol to the rescue

The results were impressive.

As expected, the 'Mars' condition weakened the rats' grip and shrank their calf circumference, muscle weight and slow-twitch fiber content.

But incredibly, resveratrol supplementation almost entirely rescued front and rear paw grip in the Mars rats, to the level of the non-supplemented Earth rats.

What's more, resveratrol completely protected muscle mass (soleus and gastrocnemius) in the Mars rats, and in particular reduced the loss of slow-twitch muscle fibers. The protection was not complete, though: the supplement did not entirely rescue average soleus and gastrocnemius fibers cross-sectional area, or calf circumference.

As reported previously, resveratrol did not affect food intake or total body weight.

"Resveratrol treatment promotes muscle growth in diabetic or unloaded animals, by increasing insulin sensitivity and glucose uptake in the muscle fibers. This is relevant for astronauts, who are known to develop reduced insulin sensitivity during spaceflight."

The anti-inflammatory effects of resveratrol could also help to conserve muscle and bone, and other anti-oxidant sources such as dried plums are being used to test this, adds Dr. Mortreux.

"Further studies are needed to explore the mechanisms involved, as well as the effects of different doses of resveratrol (up to 700 mg/kg/day) in both males and females. In addition, it will be important to confirm the lack of any potentially harmful interactions of resveratrol with other drugs administered to astronauts during space missions."

Muscle Cramps Symptom Evaluation
Muscle cramps occur commonly and result in temporary pain in the muscles. They are often due to ......

Is Red Wine Compound Resveratrol Effective in Treating Knee Osteoarthritis?
The orally administered resveratrol led to a significant reduction in the total pain score and to .....

Red Wine Before Smoking can Prevent Blood Vessel Damage
Red wine stimulates the formation of relaxation factors such as nitric oxide, which improve ......