Rafi  Girl Who Gets Blisters When Touched 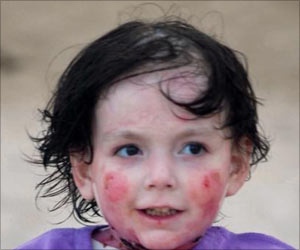 Six-year-old Rafaella (Rafi) Kopelan, a resident of Manhattan, suffers from a rare genetic skin disorder, Epidermolysis Bullosa, which causes her to have a very delicate skin that blisters and tears even with the slightest touch.

'Imagine most of your body as an open wound  We have to hurt our daughter in order to keep her clean and safe,' her parents say.

People with epidermolysis bullosa (EB) develop skin blisters in response to minor injury. EB can occur in all racial and ethnic groups.
Advertisement

Her parents prepare her for the day ahead by bathing her and applying special creams and expensive nonadherent bandages to her wounds to prevent them from getting infected.


But, Rafi's disease condition failed to deter her spirits, and she even managed to help raise a whopping $600,000 for charity.

Epidermolysis bullosa is a condition where the vital protein called collagen VII that causes the skin to stick to the muscle, is absent
Advertisement
He said: "When Rafi was born she was missing skin on the back of one hand and on both feet. The hospital didn't know what was wrong and after six hours she began to blister.

"The next morning when I saw her the world fell out from beneath my feet.

"Doctors started to rule things out and then about nine days later tested for EB.

"I called my brother who is a physician and tried to pronounce the name and he said 'oh no'  at that point I knew our lives were going to change forever.

For the initial three years of Rafi's life, Brett had to work from home and mom Jackie had to quit her job to take special care of their child.

The transplant stimulated the production of the protein, Collagen, in Rafi's body, which helped ameliorate her condition a little but not much. She still had a bad case of EB.

Doctors were wary about the prospects of future production of enough protein in her body.

Handling of EB children is entirely different from handling of normal babies.

Lifting from under the arms or giving a hug is risky as it might rip an EB child's skin apart.

Brett said, "I think that is where the idea of you can't hug an EB child came from. Does that make me sad? Yes it does."

Brett added he feels sad Rafi cannot zoom down a slide for fear of losing her skin on her bum and then hurting her feet when she hits the ground.

Brett also added the harsh fact that Rafi cannot do or experience certain things that other children can upsets him a lot.

Rafi attends a local school in Manhattan. Aside from that, she plays on swings, rides her bike and plays with the family's dog in the same way as other children of her age do.

"There was a time when Rafi said having EB made her unique, which was an incredibly mature thought pattern for a 5-year-old." said Brett with a sense of pride.

Brett said: "It's not fair she has to go through everything that she does, but she handles it with a grace and courage that I know I couldn't muster."

Brett said there is no one that he admires more in this world than his daughter.

Skin diseases also known as dermatologic disorders are many in number and so are their causes. The common skin diseases or skin disorders are usually related to the epidermal layer of skin.
Advertisement
<< Some of Gut's 'Good' Microbes Boosted With White Bread
Lupus is Exacerbated by Interplay Between Genetic Factors a... >>