Radio's Rare Voice for Peace in C.Africa, 'One Heart' 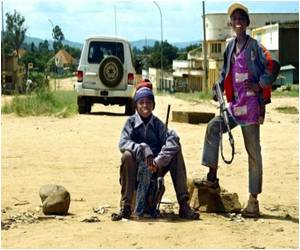 Amid brutal sectarian violence, Be-Oko ("One Heart") Radio in the town of Bambari, calls for peace hopes to stop this town in the Central African Republic from tearing itself apart; with premises miserable but mission immense.

Crumbling walls stripped of paint, the harsh glare of too-bright neon attracting hundreds of insects, a fan wedged between a couple of large stones and a long-dead computer covered with a rag: the station's headquarters is not an impressive sight.

Stock-outs of antiretroviral (ARV) drugs in recent years in the Central African Republic have had a dramatic impact on the health of HIV-infected people, says Pierre-Marie David.
Advertisement

"There is nothing left here," says Philemon Tchang Peuty Palou, one of the five journalists who has worked here since Be-Oko launched in 2004, after delivering a segment about child protection.


In December 2012, this town in the centre of the country was ransacked by the mostly Muslim Seleka rebel group as it advanced towards the capital Bangui, where it would eventually seize power for several months.

A child no older than ten clutches a rifle, struggling to stay upright in his freshly-pressed uniform while smiling from the back of a pick-up truck careering through Bangui.
Advertisement
Be-Oko was no exception to the pillage suffered by the rest of Bambari.

"The Seleka took everything," said 33-year-old Palou. That included CD and DVD players, computers and almost everything else needed to keep the station running.

When one of his colleagues complained to the local Seleka leader -- a notorious figure nicknamed "Bin Laden" -- she was severely beaten.

"She was evacuated to Bangui, she is suffering from mental problems now," said Palou.

One saving grace -- the thieves were not interested in the transmitter. That allowed Be-Oko to return to the airwaves in December, thanks to help from two NGOs.

They were also helped by the fact that the much-feared "Bin Laden" was replaced by a respected general, Ali Darassa.

Meanwhile, the situation in Bangui is catastrophic. So-called "anti-balaka" militias, formed to fight back against the Seleka, have gone on the rampage against Muslims in recent months, leading to thousands of deaths, tens of thousands of displaced and fears of "ethnic cleansing" being voiced by the United Nations and international observers.

In this chaotic and fragile situation, Be-Oko provides a vital call for calm.

"One Heart", which started life as a Catholic station, has become multi-confessional since the violence erupted.

"The bishop asked each of the religious leaders to take to the microphone. To stop what was happening in Bangui from happening here," said Father Firman, who runs the station.

The three communities -- Catholic, Protestant and Muslim -- each buy petrol cans to run the generator.

The team feels a special responsibility since they are the only station still running in Bambari, a mostly Christian town of 45,000 and the surrounding region.

Public station Linga was also pillaged -- the Seleka "live inside it now", says one journalist -- while the transmitter of another station, Ndele-Luka ("the good news bird") no longer works.

For two hours each night, the only hours the station is on air, everyone for 70 kilometres around is listening to Be-Oko.

"Radio is a very important factor," said Pastor Ephrem, from the local evangelical church. "What we say enters into people's heads.

"Some people were preparing to take revenge, but some have told us: 'It's thanks to your advice on the radio that I held back.'"

But after two months of gradual improvement, the situation has started to worsen in Bambari.

There have been positive signs that the religious communities can live in harmony, says local leader El Hadj Abacar ben Ousmane. The town recently gave shelter to 90 Muslims fleeing violence in Bangui.

But fighting between Seleka and anti-balaka forces in Grimari, a town 80 kilometres away, has revived tensions.

Local Muslims panicked as rumours of indiscriminate attacks spread. "We have no freedom. We don't go anywhere, even to the market. It's a panic caused by the anti-balaka," said Bambari's imam, Aboubacar Suleiman.

The president of an Islamic organisation in the town, who says he is normally a pacifist, warns that the community is willing to "defend itself by all means".

"There are machetes in all the stores. We can buy them too," he said.

As tensions rise, only the calming voices of Be-Oko may stand between peace and another descent into blood-letting.