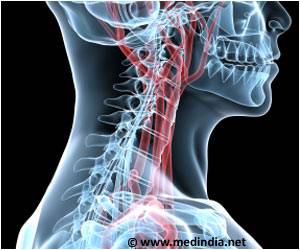 A review of medical records between 1991 and 2008 from across the country reveals that over 80 percent of white patients received radiation treatment combined with chemotherapy that preserves the larynx, or voice box. Only 74.5 percent of African American patients received this same treatment, with the remainder undergoing surgery that removed the larynx altogether, a procedure that has a dramatic effect on quality of life.

Laryngeal cancer is also called cancer of the larynx or throat cancer or laryngeal carcinoma. It usually affects men over the age of 55 years.
Advertisement


"We believe that future research should focus on identifying and eliminating barriers to the use of larynx-preservation for all medically suitable patients, with a particular focus on black patients," says lead author Allen Chen, an assistant professor in the UC Davis Department of Radiation Oncology.

Type of treatment, sex, race and insurance status are associated with survival rates among patients with advanced laryngeal cancer, according to a report.
Advertisement
Non-surgical therapy using radiation therapy with concurrent chemotherapy confers a high rate of voice conservation without adversely affecting survival for selected patients diagnosed with locally advanced cancers of the larynx.

Before larynx-preserving treatment gained widespread acceptance in recent decades, the standard of care for essentially all patients with locally advanced laryngeal cancer was initial surgical removal of the larynx, called a total laryngectomy. These patients suffer from more respiratory complications, pain and depression than patients with an intact larynx. They often develop chronic shoulder pain and sleep disturbances, and they experience worse social functioning and isolation as a result of speech impairment and body disfigurement.

While researchers observed a marked disparity between the study's white and black populations, differences were less pronounced for the Latino and Asian groups, with 78 percent of Latinos and 75.6 percent of Asians receiving larynx-preserving treatment. The observed gap between whites and blacks may also be narrowing, as the use of larynx-preservation is increasing among black patients over time.

"Further studies are needed to elicit the root causes of the current treatment disparities between whites and blacks, but it seems likely that critical factors include income, education and insurance differences, along with a lack of access to appropriate radiation facilities," says Chen, who also serves as the UC Davis Department of Radiation Oncology's residency training program director.

Chen points out that the best treatment facilities can be found at the nation's 41 NCI-designated comprehensive cancer centers, as these institutions feature not only the latest technologies but also in-depth counseling and therapy both for medical decision-making and post-treatment management.

"Larynx preservation requires close coordination of care involving multiple specialists, including radiation oncologists, medical oncologists, otolaryngologists, speech pathologists, swallowing therapists, dentists and nutritionists, among many others," he said. "Having all of these services available in centers such as the UC Davis Comprehensive Cancer Center makes treatment a lot more feasible for patients."

Selfie Addiction Calculator Find a Hospital Indian Medical Journals The Essence of Yoga Drug - Food Interactions Daily Calorie Requirements How to Reduce School Bag Weight - Simple Tips Turmeric Powder - Health Benefits, Uses & Side Effects Vent Forte (Theophylline) Hearing Loss Calculator
This site uses cookies to deliver our services. By using our site, you acknowledge that you have read and understand our Cookie Policy, Privacy Policy, and our Terms of Use