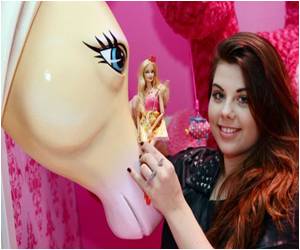 Slamming it as a sexist cliche, feminist activists were among several dozen people who demonstrated against the opening of Europe's first life-sized Barbie Dreamhouse.

Just a few steps from Alexanderplatz, the main shopping district of east Berlin, the 2,500-square-metre (26,900-square-foot) attraction transports the young visitor to a pink-hued Barbie universe.

"We don't want children having dreams that are impossible to attain without cosmetic surgery or I don't know what other physical change," Lars, 28, complained to AFP.


On a fountain in the form of a high heel, a Femen activist had her naked breasts covered by the slogan "Life in plastic is not fantastic" while burning a Barbie doll on a cross.
Advertisement
Later another protester went to throw the crucifix into the fountain, prompting members of the site's security to intervene and resulting in some brief jostling in front of news cameras.

Barbie's Dreamhouse was conjured up by Vienna-based Event Marketing Service with a licence from Mattel, the creator of Barbie dolls, and has a twin sister at a shopping mall in southern Florida.

Armed With Tweets and Jokes Are Young UK Feminists
In Britain this year a new wave of feminism has taken hold which is young, irreverent, and fuelled ....