Prognosis Not Helped by Minimally Invasive Surgery to Treat Sciatica

A study in the July 8 issue of JAMA says that comparison of surgical treatments for sciatica finds that the minimally invasive procedure known as tubular diskectomy does not provide a significant difference in improvement of functional disability compared to the more common surgery, conventional microdiskectomy.

Sciatica or lumbosacral radicular syndrome affects millions of individuals worldwide and is typically caused by disk herniation. Surgery is offered to patients with persistent pain that is not responding to conservative treatment, with the common surgical procedure being microdiskectomy (removal of injured disk tissue and pieces). The minimally invasive technique of transmuscular tubular diskectomy was introduced in 1997. "The rationale behind replacing the conventional subperiosteal muscle dissection by the muscle-splitting transmuscular approach of tubular diskectomy is less tissue damage, resulting in a faster rate of recovery but with similar long-term outcomes. Patients are expected to have reduced postoperative back pain, thus allowing quicker mobilization and contributing to shorter hospitalization and faster resumption of work and daily activities," the authors write. Although this procedure was introduced to increase the rate of recovery, there is a lack of evidence, according to background information in the article.


Mark P. Arts, M.D., of the Medical Center Haaglanden, the Hague, the Netherlands, and colleagues conducted a multicenter trial to determine the outcomes and time to recovery in patients with lumbar disk herniation treated with tubular diskectomy or conventional microdiskectomy. The study included 328 patients age 18 to 70 years who had persistent leg pain (greater than 8 weeks) due to lumbar disk herniations. Patients were randomized to either tubular diskectomy (n = 167) or conventional microdiskectomy (n = 161). Functional ability, pain and self-report of recovery were measured via a questionnaire or surveys.

The researchers found: "The expected treatment benefit of a faster rate of recovery from sciatica after tubular diskectomy could not be reproduced by this double-blind study. This study revealed evidence that the rates of recovery for the minimally invasive tubular diskectomy and conventional microdiskectomy were similar. In contrast, the overall differences in pain intensity and recovery rates favored the conventional microdiskectomy approach."

"Although the minimally invasive technique of tubular diskectomy seemed to be an attractive surgical method for treating sciatica, our data do not support a higher rate of recovery when compared with conventional microdiskectomy. On the contrary, patients who underwent tubular diskectomy fared worse with regard to leg and back pain and fewer patients reported complete recovery at 1 year," the authors conclude. 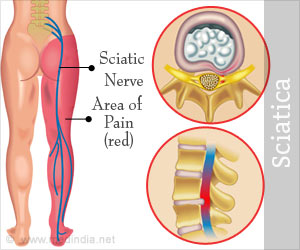 Sciatica
Sciatica refers to the pain that is caused by irritation or compression of the sciatic nerve. Sciatic pain is felt from the low back.
READ MORE