Precautions Against Deadly Ebola Outbreak Adopted Across the Globe 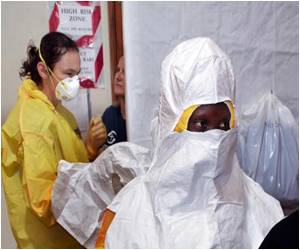 Even as the WHO issued a global alert on Friday, the world was already on the lookout for Ebola victims with nurses taking nervous passengers' temperatures at airports and isolation wards standing eerily empty waiting to receive anyone showing symptoms.

Concern is highest in west African countries neighbouring those worst-affected by the outbreak that has killed nearly 1,000 people -- Liberia, Guinea and Sierra Leone.

In Nigeria, which has so far avoided major casualties with just two deaths, passengers arriving on international flights are made to fill in a questionnaire before having their temperatures taken by nurses.


All four countries have declared states of emergency.

But Europe was also scrambling to prevent the disease from being brought in by people travelling from west Africa, although the European Commission said the risk of Ebola reaching the European Union remained "extremely low".
Advertisement
The World Health Organisation stopped short of calling for travel restrictions on flights, but British Airways and Emirates are among airlines that have stopped flying to and from countries where Ebola has claimed victims.

Passengers on flights to Germany's biggest airport, Frankfurt, who show signs of the disease are marked out with a red sticker before being taken directly to a hospital after landing. Passengers in the neighbouring seats receive a yellow sticker and are examined in an isolation room.

Here is a region-by-region breakdown of measures being taken:

- Travellers arriving on international flights to Nigeria's biggest city, Lagos, are being asked to fill out a form detailing their health history before having their temperature taken by two nurses.

- Lagos state has set up a special quarantine unit where all five confirmed Ebola cases are being treated. The hospital where the first Ebola patient died has been closed indefinitely. President Goodluck Jonathan announced additional isolation centres, screening at borders and contact tracing and called on community groups to limit gatherings.

- Screening has been put in place at the main airports in Kenya, Ethiopia, Rwanda, Tanzania and Uganda, while the Democratic Republic of Congo has toughened its screening measures.

- In Sudan, all African Union-United Nations Mission in Darfur staff will have to undergo strict medical tests with UN-certified medical staff while travelling between west Africa and the Mission.

- Health ministers from the 15 Southern African Development Community (SADC) countries have urged governments and community, religious and political leaders to work together to increase awareness and prevent the disease from taking hold in the region.

- Two American missionaries evacuated from Liberia after contracting the disease are receiving an experimental drug as part of their treatment at Emory University Hospital in Georgia. Their condition improved after taking the drug.

- The US Centers for Disease Control and Prevention (CDC) has 200 staff working on the Ebola response and the number is expected to increase rapidly in the days to come.

- An elderly Spanish missionary was evacuated from Liberia after contracting Ebola while helping hospital patients in Monrovia. He was accompanied by a nun who was also displaying symptoms, but she has so far tested negative. For travellers from countries such as Nigeria, Spain relies on pilots to inform authorities of any passengers whose health provokes concern.

- The European Union on Friday allocated an extra eight million euros -- bringing total funding for the crisis to 11.9 million euros -- and a new mobile laboratory to fight the Ebola outbreak.

- All passengers boarding Air France flights from Guinea and Sierra Leone must take a temperature test at the airport before receiving boarding passes, while Amsterdam's Schiphol Airport has set up checks for travellers arriving from Nigeria, including a body temperature check.

- France is preparing to deploy mobile laboratories and to evacuate citizens from affected countries if necessary.

- In Switzerland, passengers on board a flight from Brussels were kept on the plane after a passenger travelling from Africa vomited and showed signs of fever during the flight, but health experts diagnosed it as food poisoning.

- Britain has set up a two-bed Ebola unit, but unlike other countries has decided against screening incoming international travellers at airports, with authorities saying experts doubt the effectiveness of temperature screening in the early stages of the disease.

- Russia has checked 45 flights from west Africa in 24 hours, but no cases were found.

- Czech health authorities are distributing information leaflets to airports and key railway stations, while Serbia, Albania and Macedonia have all reinforced health inspection teams at airports and border crossings.

- Japan on Friday called on citizens living in affected countries to evacuate immediately.

- Saudi Arabia on Monday suspended the granting of visas to Hajj worshippers from Liberia, Sierra Leone and Guinea.

- Specialist isolation units have been set up in many other countries including South Africa, Denmark, Sweden, Switzerland, Serbia, Sweden and Bosnia to deal with any cases.

Source: AFP
Advertisement
<< Microtubule-Based Strategy may Promote Nerve Regeneration A...
Did You Know Eating Out Means An Increase Of 200 Calories Pe... >>

US to Send Extra Personnel and Resources to Help Nigeria Overcome Ebola Outbreak
With Nigeria becoming the latest victim of the Ebola outbreak in West Africa, health authorities in ...

Ebola Outbreak Dramatic but Containable,' Say Experts as They Warn Against Overreaction
Health experts have said that while the current Ebola outbreak is deadly, it is a containable ......

Nigeria Follows Liberia in Declaring National Emergency Over Ebola Outbreak
The Nigeria president has followed the footsteps of his Liberiaian counterpart by declaring a ......