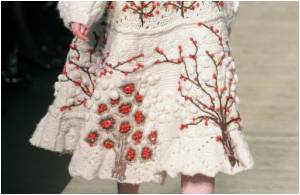 Jean-Paul Gaultier waxed eloquent at the close of his couture show that celebrated powerful and sensous women - his closing words said it all, "Perhaps it was pretentious, but they say couture is like a Stradivarius, a bit aggressive, a bit of a rebel, but a virtuoso."

For a finale his bride, in a trenchcoat, pulled out a violin and after a brief warm up, struck up in a convincing mime to a tape of the wedding march.
Advertisement

It was yet another collection celebrating women in full control of their powers of seduction - like burlesque artiste Dita Von Teese, who came down the catwalk in a powder pink corset boned in black, watched admiringly by her companion Louis-Marie de Castelbajac, sitting next to his designer father in the front row.


"It's really just an excuse," explains Gaultier. "Dita likes taking her clothes off to be better dressed."

He said his entire collection aimed to show the internal structure of clothes like the corset worn by Dita.
Advertisement
The first spontaneous bursts of applause were for a long skirt in tweed picked out with black and white ostrich feathers, which looked airy despite the weight of the material.

Warm fabrics predominated, like a tantalisingly tactile fox stole and a cognac leather suit with pockets fastened with purse clasps.

A grey-blue pullover and pants ensemble had breasts enhanced by black sable, reminiscent of the cones he created for Madonna all those years ago. More fur emphasised the model's derriere.

At Frank Sorbier's show, the models emerged from an artificial mist onto a carpet strewn with autumn leaves, which set the romantic, gently melancholic mood of the collection.

His opening number was a voluminous hooded cape, a patchwork of animal pelts dyed in watery shades of violet and red, over a crushed velvet antique gold dress with a bustier of mirrorwork held together with gilt strings.

Next came a sober black pants suit with miniature silver chainmail purses stitched onto the pockets and a ballerina's tutu in beige silk organza topped by a corset bristling with raffia and straw.

Only 16 models, but the collection could have been a personal manifesto of Sorbier's commitment to haute couture on his own terms, working independently from the global luxury conglomerates.

Velvets handpainted by his wife Isabelle, plastic-treated cotton gleaming like tarmac, dresses reconstructed from cut up guipure lace, a Chinese quilted coat of hand-coloured black and white postcard views, and the usual shredding and compressing of fabrics that is Sorbier's hallmark were all part of the mix.

As ever he cannot resist the odd joke: a "Dada" papier mache dress with a bodice of corrugated cardboard and wooden clothes pegs and wine corks on the nipples and a "bonus track" corset top made up of shiny sweet packets and biscuit boxes.

Last season it was exquisitely made corsets. This time Italian designer Giovanni Bedin has covered up the underpinnings with mini coat dresses for his second capsule couture collection for Worth, part of a strategy to revive the historic fashion house founded in Paris in 1858.

A ready-to-wear line is to follow in Milan and next month the house perfume Je reviens is being relaunched.

Bedin's eight redingotes were worked in lavish lace and gold filigree threadwork, mounted on padding over crinoline hoops, some with skirts whooshed up like Elizabethan ruffs. Fastenings were specially commissioned ornate buttons in the shape of gilded snake's heads in enamel and precious stones.

Mounted on tailor's dummies, waists looked impossibly narrow, but Bedin insisted they could be worn, pointing to discreet panels of stretch fabric at the sides.

Source: AFP
Advertisement
<< Increased Attention Problems in Kids Due to TV Viewing and ...
The Wake Up Ritual of Young Women in America - Check Facebo... >>

'Canine Couture' can be Hazardous for Pet Pooches
Animal welfare experts have warned that dog owners who dress their pets are putting them at risk of ...

Fashion Unveils Its Diktats for 2010 Summer
As light as meringues and mouth-watering as sorbets, Karl Lagerfeld's haute couture lines for next ....