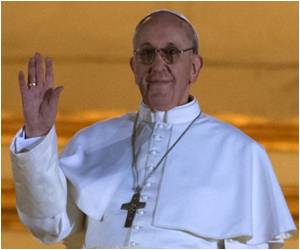 Even though Pope Francis is seen as one of the most charismatic leaders of the current age, the head of the Catholic Church faces an uphill battle if he is to unite the Catholic and Orthodox churches.

The logo the Vatican has designed for the visit depicts an embrace between St Peter and St Andrew -- representing the Catholic and Orthodox worlds -- in a sailboat under the slogan "May They Be One".

Francis will meet the Orthodox Patriarch of Constantinople Bartholomew four times on the trip, including for a prayer with clergymen from other branches of Christianity in Jerusalem on Sunday.


The entire trip is timed around the 50th anniversary of a historic meeting -- also in Jerusalem -- between one of Francis's late predecessors, Paul VI, and the then Constantinople patriarch Athenagoras.
Advertisement
But healing a rift in Christianity dating back to the 11th century is a virtually impossible task and no amount of kind words about brotherhood will do the job -- at least not during the pope's tour.

In the Middle East in particular, Christians are badly divided and bickering and face pressure from rising Islamism that has forced many to emigrate.

Most recently, the Orthodox patriarchates of Jerusalem and Antioch had a territorial squabble this month over control of an archdiocese in Qatar.

The Ukraine crisis has further jammed up efforts to unite different branches of Christianity as the Ukrainian Greek Catholic Church, which is loyal to the Vatican and is strongest in western Ukraine, is at odds with the Russian Orthodox Church.

A long hoped for historic meeting between Pope Francis and Russian Orthodox Patriarch Kirill is hard to imagine in the current circumstances.

While the meetings with Bartholomew are significant and the patriarch has historically been seen as a "first among equals" among Orthodox leaders, he is responsible for just around 9,000 faithful in Turkey -- compared to some 130 million Russian Orthodox.

"It's not magic! You don't have to dig very hard to find that the Church is divided and wounded," said David Neuhaus, a Jesuit priest in charge of Jerusalem's Hebrew-speaking Catholic community.

John Allen, a Vatican expert writing for the US daily Boston Globe, said: "It remains to be seen whether the tete-a-tete between Francis and Bartholomew can overcome mutual suspicions centuries in the making."

While bringing an end to divisions is not on the cards -- at least not in the immediate feature -- some observers say there are more reasons for optimism linked to Francis's more collaborative style.

Francis has called for a less "Vatican-centric" Catholic Church and has set up a council of cardinals from around the world to advise him, as well as showing a willingness to give more power to bishops.

The pope has also pleased other Christian denominations by frequently referring to himself as "Bishop of Rome", although the Vatican's claim of "primacy" over other churches is a stumbling block.

Francis has also given more attention to ecumenism -- the ideal of Christian unity. In reference to the rise of anti-Christian Islamist attacks, he has spoken of an "ecumenism of blood".

Francis has also been able to build on a record of cooperation with the Orthodox churches by his predecessors John Paul II and Benedict XVI that has narrowed differences on a theological level.

Bartholomew attended the pope's inauguration last year -- the first time that a Constantinople patriarch had attended the ceremony since 1054, when the eastern and western halves of Christendom split.

"This gesture shows the importance which I attach to friendly relations between the two churches," Bartholomew, who has worked for years to heal ties with Rome, told Turkish channel NTV at the time.

A day later, Bartholomew was invited to open a meeting with Francis and other religious leaders in the Vatican in which he told the group that Christian unity was "our first and most important concern".

Francis assured Bartholomew -- whom he referred to as his "brother" -- of his "firm willingness to continue with the path of ecumenical dialogue".

More News on:
Why Do We Wink?

In Boost for Poor, Vatican Cuts Sainthood Costs
The Vatican will be cutting the costs of sainthood applications, which could shoot up to a million ....