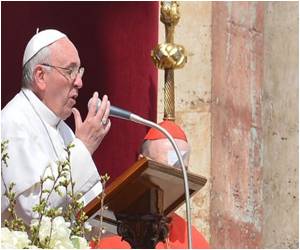 A Pew Research Center poll released Wednesday revealed that 84 percent of Roman Catholics in the United States have a favorable view of Pope Francis.

"Francis is viewed much more favorably by US Catholics than Pope Benedict XVI was during the early days of his pontificate," said Pew's Forum on Religion and Public Life as it released its findings.

Some 193 Catholics were among the 1,001 adult Americans that Pew's pollsters contacted by telephone on March 28 to 31, hard on the heels of the new pope's election on March 13.


Among Americans as a whole, the survey found that 57 percent have a favorable view of Pope Francis while 29 percent felt unable to rate the Argentine-born pontiff. Fourteen percent held an unfavorable opinion of him.
Advertisement
By comparison, 67 percent of US Catholics thought favorably of Pope Benedict three months after his papacy started in April 2005, while his predecessor Pope John Paul consistently polled in the 90 percent range, Pew said.

Nearly one in four Americans identify themselves as Roman Catholics, making the United States the most Catholic of all industrialized nations -- although many distance themselves from the church's stand against abortion and same-sex marriage.

Vatican's Top Astronomer Says 'End Of World' Billions of Years Away
Talks of December 21 Mayan doomsday were rubbished by the director of the Vatican Observatory who .....