Pitch of the Voice Determines the Way People Influence Others 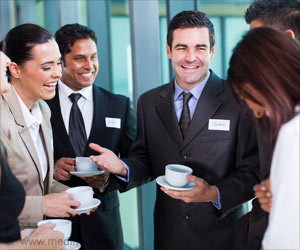 People who lower their vocal pitch early during an interaction are considered to be dominant than who raise their voice early, said a new study.

Those viewed as dominant were also more likely to convince others to go along with their ideas than those seen as less dominant.

Candidates With Deep Voice Have Better Chances of Winning Polls

As individuals with lower voices have higher levels of testosterone, male candidates with lower voices are perceived as aggressive when paired against a female.
Advertisement
‘Humans assert dominance over others through their vocal pitch.’

Researchers also found that dominant participants were not considered more prestigious, esteemed or admirable by their peers.


"What excites me about this research is that we now know a little bit more about how humans use their voices to signal status," said lead study author Joey Cheng from University of Illinois.

Humans can Identify Their Friend's Voice from Just Two Words

While advanced technologies are able to capture speech information, only humans so far are able to recognize familiar voices with almost total accuracy.
Advertisement
"This study clearly shows that there's something about the voice that's very interesting and very effective as a channel of dynamically communicating status," Cheng added in the paper, published in the Journal of Experimental Psychology: General.

In the first study, 191 participants -- aged 17 to 52 -- individually ranked the importance of 15 items that they might need to survive a disaster on the moon.

The researchers videotaped these interactions and also looked at "how one person's answers converged with the group's final answer" as another way to measure influence.

The participants and outsiders viewing their interactions tended to rate those whose voices deepened between their first and third utterances as more dominant and influential than participants whose voices went up in pitch.

Those viewed as dominant and prestigious were most influential in the group interactions, Cheng noted.

"In fact, what we've found previously is that both of these strategies - prestige and dominance - positively correlate with behavioral influence," she said.

In a second study, researchers asked 274 participants - aged 15 to 61 - to listen to a pair of audio recordings of a person making three statements.

They found that when the voice in the recording goes down in pitch, people judged them as someone wanting to be more influential, more powerful, more intimidating or more domineering.

"Our study adds to the evidence that humans, like many other animals, use their voices to signal and assert dominance over others," Cheng explained.

Masculine, Tall Men in Their Mid-Thirties Perceived to be Most Dominant

Understanding what it is that makes someone look dominant is important since a dominant appearance is associated with a variety of social outcomes
Advertisement
<< Life Expectancy of Females Increase Due to Fall in Birth Rat...
Zembrace Symtouch Anti-Migraine Injection of Dr. Reddys Now... >>

Drug - Food Interactions Blood Donation - Recipients How to Reduce School Bag Weight - Simple Tips Find a Doctor Calculate Ideal Weight for Infants Noscaphene (Noscapine) Blood Pressure Calculator Vent Forte (Theophylline) Find a Hospital Diaphragmatic Hernia
This site uses cookies to deliver our services. By using our site, you acknowledge that you have read and understand our Cookie Policy, Privacy Policy, and our Terms of Use