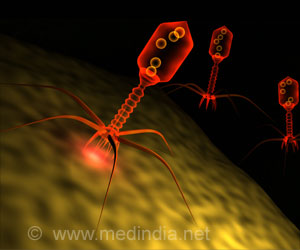 Bacteriophages are viruses that infect bacteria and they hold considerable potential for combatting antibiotic-resistance and other threats to human health. Timed with the hundredth anniversary of their discovery, a new review published in the British Journal of Pharmacology examines the challenges and opportunities of developing phages as health-promoting, commercially-viable biopharmaceuticals.

In the review, Amanda Forde, PhD, and Colin Hill, PhD, of the APC Microbiome Institute at University College Cork, in Ireland, note that phages have complex relationships with bacteria in the gut that could affect health and disease. "Through an intricate 'predator-prey' strategy, phages have the ability to alter the microbial balance within an ecosystem, and given that they are the most abundant biological entities on earth, it would be odd to ignore or underestimate their power and potential," said Dr. Forde. She explained that phages outnumber their bacterial prey by a factor of 10 to 1, and that they have been proposed as the agents of change in recipients of faecal microbiota transplantations used to treat resistant or recurring bowel disease.

Advertisement
‘Phages have high host specificity, meaning little or no damage to neighbouring good bacteria, and they do not drive the development of resistance in non-target bacterial species.’

"We tend to think of phages as nature's 'nano-machines', self-assembling complex biological survival machines capable of replicating faster than any other biological agent," said Dr. Hill. "They are highly diverse, highly dynamic, and highly specific to their targets, and as antibiotic-resistant 'superbugs' continue to emerge around the world, they may be among our best allies in the future."


Despite having been discovered a century ago, their use in clinical therapy continues to encounter several challenges. "One of the challenges lies in the fact that more than 90% of phage populations are as yet unidentified, and therefore considered to be the 'dark matter' of the biological world," said Dr. Hill. "Coupled with manufacturing challenges, regulatory hurdles and the need for clinical validation, the path to pharma may seem long, but researchers are heading in the right direction."
Advertisement
Phages were used for more than 75 years as therapy in Eastern Europe, but they fell out of favour in the western world when antibiotics were discovered. They are now becoming attractive again because of the rise in antibiotic resistance. A unique selling point is their host specificity, meaning little or no collateral damage to neighbouring ('good') bacteria, and they do not drive the development of resistance in non-target bacterial species.

"Whilst regulated phage therapy may take some time, it has been highly successful in recent 'compassionate' cases where patients' lives were on the line," said Dr. Forde. "But for regulated interventions, we need to play the waiting game as more genomic, physiological, pharmacological, and clinical data are gathered. And wait we will."

New Virus That Invades Soil-Friendly Bacteria Discovered
A new virus that invades soil and hampers its functioning, which may affect the production of crops ...