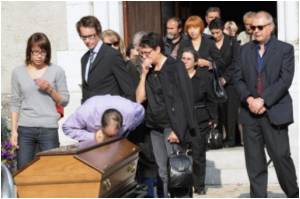 Mothers losing an adult child to suicide and people bereaved by the suicide of a partner run a significantly higher risk of suicide compared to people bereaved after sudden deaths from other causes.

Suicide attempts are significantly greater odds in teenagers who have suffered a traumatic brain injury such as concussion, being bullied and engaging in high risk behaviours.
Advertisement

The findings come from a new Review, published to coincide with the launch of The Lancet Psychiatry journal, reviewing the evidence from 57 studies comparing the effect of suicide bereavement on death, mental health, and social functioning of family members, friends, and other close contacts of the deceased with the effects of other sudden bereavements.


According to lead author Dr Alexandra Pitman from University College London (UCL) in the UK, "Based on published evidence we made a rough estimate that between 48 and 500 million people worldwide experience suicide bereavement each year. In our review we show that the impact of suicide appears to vary according to kinship, but that all members of the deceased's family and friends are likely to need support. Our findings are striking given that suicide prevention policies tend to treat people bereaved by suicide as one group, rather than recognising that bereaved partners and mothers may be at greater risk of suicide than other relatives and friends.

The missing Malaysian Airline passenger jet MH370 is a deliberate act in an apparent 'suicide mission', states a UK newspaper.
Advertisement
In view of the extent of the risks associated with suicide bereavement, the current reliance on the voluntary sector for bereavement support (for example Cruse Bereavement Care, Samaritans, Survivors of Bereavement by Suicide, Winston's Wish) may be unsustainable and inappropriate. More input may be needed from health and social services as well as education of the public on the best ways to respond to a bereaved person."*

As parliament prepares to examine a bill, the Ministry of Justice said that the British government will not stand in the way of legislation that would permit assisted suicide.
Advertisement
<< Expensive Helmets Do Not Improve Skull Deformation in Healt...
Nearly 60 Percent of People Who Attempt Suicide Do Not Rece... >>

Suicide-related Behavior Rates Have Stopped Declining After Years of Improving