Orient Express Takes You to a Journey Back in Time 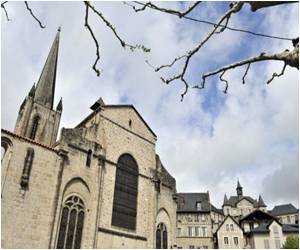 In Paris, the Orient Express lets out a whistle and a chug, just as it did 130 years ago, when it pulled out of Paris's Gare de Strasbourg on its inaugural journey to Istanbul.

Crowds of Parisians gathered to watch that first journey on October 4, 1883, and in the intervening years the train has lost none of its appeal.

After slices of pork and a threatening letter were stuffed in the letterbox of a mosque in Paris suburbs, the authorities have filed a complaint with the police.
Advertisement

On this occasion, however, this most celebrated of trains is going nowhere and the sound effects although evocative are just a recording setting the scene for a new exhibition featuring three restored carriages and a locomotive.


Stepping on board, the visitor is immediately immersed in the atmosphere that once made the train the last word in elegant travel and inspired authors such as Agatha Christie and Graham Greene.

A landmark luxury hotel in Paris, Le Lutetia, whose guests have included Pablo Picasso, Charles de Gaulle and James Joyce, closes Monday for a three-year renovation following similar makeover moves by rivals.
Advertisement
Everything is laid out just as it might have been in its heyday.

Plush, upholstered seats in the wood panelled compartments are the first sign of the comfort to which passengers were accustomed while old newspapers, card games and cigarettes lie on the tables.

The brainchild of Belgian engineer Georges Nagelmackers, the Orient Express -- operated by his Compagnie Internationale des Wagons-Lits -- used the latest 19th century technological advances to supply an unprecedented level of luxury for its well-heeled clientele.

At a time when many in Europe's capital cities still lived in slum conditions, passengers on the Orient Express enjoyed central heating, hot running water and gas lighting.

In the dining car, Orient Express monogrammed china, a decanter of brandy and bottles of champagne are laid out on crisp white table linen.

The wooden panels of the carriage are decorated with intricate inlay work.

Elsewhere, in a reference to the train's literary connections, a Penguin edition of Greene's "Stamboul Train" lies on a table beside an antique portable typewriter and a bottle of "Old Lady's" dry gin.

Christie famously immortalised the train in her "Murder on the Orient Express" which ends with the fictional Belgian detective Hercule Poirot presenting his theories to the assembled travellers in the dining car.

The murder mystery was turned into a 1974 film with Sidney Lumet directing an all-star cast including Ingrid Bergman and Albert Finney as Poirot.

Ian Fleming and Bram Stoker were also inspired by the service. In Fleming's "From Russia with Love" James Bond travels on the train while "Dracula" also features a journey on the Orient Express.

Originally a twice-weekly service between Paris and Istanbul via Strasbourg, Vienna, Budapest and Bucharest, passengers made the last part of their journey to Istanbul by ferry.

In later years, the service branched out to include other farther flung destinations such as Ankara, Baghdad and Cairo.

Over the decades the route changed many times and the service finally fell victim to a combination of modern low-cost air travel and high-speed rail.

The last return voyage to Istanbul ran in 1977 while the final Orient Express service, by then pared down to an overnight journey between Strasbourg and Vienna, ran in 2009.

By then the service had little in common with its illustrious forerunner. Without a buffet, let alone a restaurant car with silver service, the luxury for which it had once been famous had long since become the preserve of private trains such as the Venice Simplon Orient Express and the Danube Express's Istanbul Odyssey.

Today the Orient Express brand is the property of France's SNCF national railway. It owns seven original Pullman carriages, which have national historic monument status in France, including the three that are on display at Paris's Arab World Institute until the end of August.

For anyone keen to recreate something of the original experience, however, the Institute has brought in chef Yannick Alleno.

The handbags that adorn the shelves of Serge Amoruso's Paris boutique have something missing.
Advertisement
<< Jimmy Choo's Sole Couture Line
Automakers in China Eager to Sell and Resell >>

How to Reduce School Bag Weight - Simple Tips Blood Pressure Calculator Sanatogen Find a Hospital The Essence of Yoga Noscaphene (Noscapine) Drug - Food Interactions Accident and Trauma Care Diaphragmatic Hernia Post-Nasal Drip
This site uses cookies to deliver our services. By using our site, you acknowledge that you have read and understand our Cookie Policy, Privacy Policy, and our Terms of Use