Bullying at the office is more common than once thought. For instance, a recent survey has revealed that one in every seven Britons employed in the public sector is bullied at the workplace.

According to the YouGov survey for the Trades Union Congress (TUC), more than a fifth of workers said bullying is a problem where they work, compared to one in ten in the private sector and eight in every hundred doing voluntary work.

"Every organization needs to have an anti-bullying policy, and every manager should ensure that there is zero-tolerance of bullying either by line managers or workmates," the Mirror quoted Brendan Barber, TUC general secretary, as saying.


"It is not the low paid who are most likely to say they are bullied," the survey said.

Nearly 16 percent of men, compared to 12 percent of women, said that they have had to put up with abuse in the workplace.

Workplace Jokes may Render You Jobless
Stop and think twice before cracking a joke at your workplace the next time, for people prowling around could see you being chased out of the company.
READ MORE

Bullying in Children - Tips For Teachers and Parents
Bullying is a harmful action (physical or psychological) carried out by a child against another. It is usually repetitive and unprovoked.
READ MORE 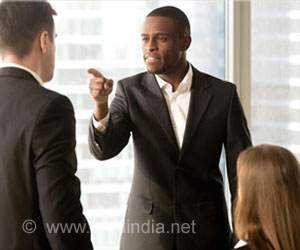 Workplace Bullying
Workplace bullying is physical, verbal or psychological abuse at work. It is a deliberate and disrespectful behavior by an employer, manager or group of people.
READ MORE