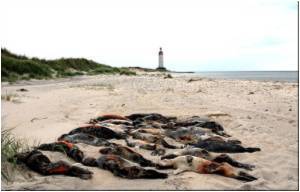 The oceans are headed for extinction. The deterioration that has set in looks irreversible, says Ove Hoegh-Guldberg, a co-author of the report published in the Science magazine. He is also the Director of the Global Change Istitute at the University of Queensland, Australia.

Although there is considerable uncertainty about the spatial and temporal details, climate change is clearly and fundamentally altering ocean ecosystems. Further change will continue to create enormous challenges and costs for societies worldwide, particularly those in developing countries, the report says.

It brings together dozens of studies that collectively paint a dismal picture. John Bruno, an associate professor of marine sciences at the University of North Carolina at Chapel Hill and the report's other co-author, said,  "We are becoming increasingly certain that the world's marine ecosystems are reaching tipping points," Bruno said, adding, "We really have no power or model to foresee" the impact.


The oceans, which cover 71 percent of the Earth's surface, have played a dominant role in regulating the planet's climate. However, even as the understanding of what's happening to terrestrial ecosystems as a result of climate change has grown, studies of marine ecosystems have lagged, the report says. The oceans are acting as a heat sink for rising temperatures and have absorbed about one-third of the carbon dioxide produced by human activities.

·  The average temperature of the upper level of the oceans has increased more than 1 degree Fahrenheit over the past 100 years, and global ocean surface temperatures in January were the second-warmest ever recorded for that month.

·  Though the increase in acidity is slight, it represents a "major departure" from the geochemical conditions that have existed in the oceans for hundreds of thousands, if not millions, of years.

·  Oxygen concentrations have been dropping off the Northwest U.S. coast and the coast of southern Africa, where dead zones are appearing regularly. There is paleontological evidence that declining oxygen levels in the oceans played a major role in at least four or five mass extinctions.

·  Since the early 1980s, the production of phytoplankton, a crucial creature at the lower end of the food chain, has declined 6 percent, with 70 percent of the decline found in the northern parts of the oceans. Scientists also have found that phytoplankton are becoming smaller.

Mindless overfishing is turning sea-beds into vast wastelands, warns Canadian expert Taras Grescoe in his new book Bottomfeeder.
Advertisement
Advertisement
This site uses cookies to deliver our services.By using our site, you acknowledge that you have read and understand our Cookie Policy, Privacy Policy, and our Terms of Use  Ok, Got it. Close
×