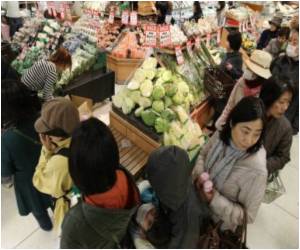 The nuclear disaster that hit Japan's Fukushima Prefecture over two years ago appears now to be gradually receding into the past. The disaster forced over 160,000 residents to evacuate. Key officials are saying that daily essentials such as rice, vegetables and other products are free of radioactive substance.

To prove this, a recent study tour of Fukushima was organised by HIS, Japan's biggest travel agency.

The tour included a visit to a 10,000-hectare agricultural farm that was once left in a complete state of devastation by the nuclear disaster and subsequent tsunami.


In its heyday, it produced food for about a million people.

In the two years since the disaster, some of the evacuees and some residents have started the "Kaachan" power project, which essentially involves providing edible and safe meals consisting of vegetables, rice and other ingredients produced in Fukushima.
Advertisement
Ms.Tomiko Watanabe, one of the persons involved with the project, said: "Fukushima food is safe because radioactive contaminants are measured very strictly."

"Currently, the Japanese government standard is 100 becquerel. Imported food is 370 becquerel. For example, the Ukraine level is 40 becquerel, but the Kaachan project level is beneath 20 becquerel. In spite of this evidence, 44 countries have refused to import products from Fukushima. We are fighting rumor and stereotype," Watanabe added.

Seiji Kanno, a farmer, said that 99.9 per cent of the rice produced in Fukushima is under 25 becquerel, while the radioactive element in 95 percent is contained.

Last year, he claims, school lunch did not include any product manufactured in Fukushima, but this year, Fukushima-produced ingredients are being used.

"To become aware of ground realities, everyone must visit Fukushima to see the change that has come about for the better," said one of the study tour participants.

Ms. Megumi Noda, one of the organiser's of the study tour, said: "This study tour is first step. In near future, I would like to invite foreigners for the Fukushima study tour."

As Radiation Fears Cut Exercise Fukushima Kids Get Fatter: Japanese Government Report
A Japanese government report said that children in Fukushima are getting fatter as outdoor ......

UN: Fukushima Cancer Risk Very 'Low'
A preliminary report by the World Health Organization has said that there is a low risk that cancer ...

WHO Report on Fukushima Radiation Questioned by Activists
The World Health Organization was accused by activist physicians of downplaying the health impact .....