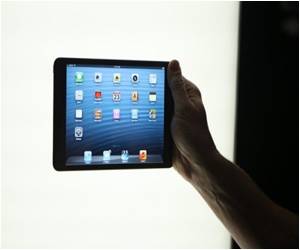 Around 38 percent of toddlers and infants under the age of two have used a mobile device such as a tablet or smartphone, compared to 10 percent in 2011, says a new study.

The study by Common Sense Media said young children up to age eight still spend more time with "traditional" screen media such as TV, DVDs, computers, and video games, but that this is shifting.

Overall screen time is down by 21 minutes, with mobile time up 10 minutes, the study found. Viewing on a television set still makes up half of all screen time.


"This is quite an extraordinary shift for our young children," said James Steyer, chief executive and founder of Common Sense Media.

"In the past we could measure and control exactly where, when, and how they were engaging with screens. Now, mobile devices follow our kids from room to room," he said.
Advertisement
"The media children consume can have a profound impact on their learning, social development, and behavior, and the only way to maximize the positive impact -- and minimize the negative -- is to have an accurate understanding of the role it plays in their lives. These kids are true digital natives."

"I've never seen a new medium take hold among little kids this fast," said researcher Vicky Rideout. "As many little babies and one-year-olds have used smartphones or tablets today as all kids under eight had done just two years ago."

The most common mobile media activity among children is playing games, cited by 63 percent of parents. And parents also said 30 percent of kids used these devices for reading.

The study found educational TV is the most popular screen activity among young children, with 61 percent watching some programming.

On average, children in this age group read or are read to for just under half an hour a day, roughly the same as in 2011.

The report is based on a survey of 1,463 parents of children age eight and under including an "over-sample" of African-American and Latino parents from May 20 to June 12.