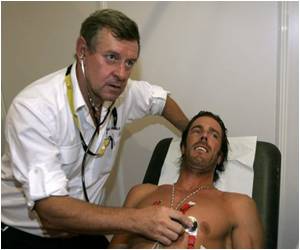 For many years, Avinash Bhandoola, PhD, professor of Pathology and Laboratory Medicine, has studied the origins of T cells.

One protein called Notch, which has well-known roles in the development of multiple tissues, plays an essential role in triggering T-cell development. T cells are immune cells that are made in the thymus, a small organ situated under the breastbone near the heart. However, T cells, like all blood-cell types, originate from blood-producing stem cells in the bone marrow. Immature T-cell progenitors leave the bone marrow, settle within the thymus, and eventually give rise to T cells.

With graduate student Maria Elena De Obaldia, Bhandoola describes in Nature Immunology this month how Notch signaling induces expression of genes that promote the maturation of T cells and discourage alternative cell fates. Deficiency of the Notch target gene Hes1 in blood stem cells results in extremely low T-cell numbers, but the underlying mechanism is unknown. Keeping in mind that Notch signaling gone awry induces leukemia, De Obaldia notes that "understanding the Notch pathway on a molecular level can shed light on how normal cells are transformed in the context of cancer."


The current study describes the mechanism of action of Hes1, a repressor protein that acts in the nucleus of immature T cells in the thymus. De Obaldia and Bhandoola found that Hes1 turns off genes such as C/EBPalpha, which promote the myeloid-cell fate and antagonize the T-cell fate. Whereas Hes1-deficient mice show severe T-cell defects, deleting the myeloid gene C/EBPalpha could restore normal T-cell development. This provided evidence that Hes1 keeps immature T cells on track by preventing them from defaulting to a myeloid developmental pathway, which controls non-lymphocyte cell maturation.
Advertisement
Because of this "policing" function, De Obaldia likens Hes1 to the traffic cop of T-cell development: "T-cell leukemias are addicted to Hes1, perhaps because it keeps progenitor cells on the path to producing more T cells, as opposed to myeloid cells. Bhandoola adds, "Our findings establish the importance of constraining myeloid developmental programs early in T-cell development, and this knowledge may provide clues about how to stop T-cell leukemias." Future studies will address whether Hes1 serves a similar function in Notch-dependent, T-cell leukemias by repressing myeloid genes, as it does during normal T-cell development.

Brown Fat Cells Have Potential for Treating Diabetes and Obesity
In the last decade or so, obesity and diabetes have become a global epidemic leading to severe ......

Method to Convert Fat Cells into Liver Cells Developed by Stanford Researchers
Researchers at Stanford University School of Medicine have managed to develop a fast and efficient ....

Method Used By Heart Cells To Regulate Heart Activity Discovered By Research
New research from Western University (London, Canada) is leading to a better understanding of what ....