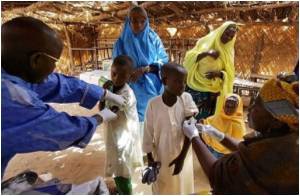 The hunger crisis in Niger is reaching catastrophic proportions. A combination of drought, poor harvests, and high food prices has made life miserable for the people of this West African country.

After a prolonged drought, heavy rains have now hit parts of the country, killing at least six people. Food needs to be transported into remote areas that suppliers cannot always reach. This is only going to become more challenging as the rainy season gets underway, the United Nations fears. More than 67,000 people lost their homes after severe rains in the past week.

A Balanced Diet is a diet, which provides optimum amount of nutrients.
Advertisement

The River Niger - the third largest in Africa - reached its highest level for 80 years, said the regional river authority, the ABN.


But the rains came too late to rescue this year's crops, which have already failed. Poor and erratic rainfall has affected agricultural production and pasture availability throughout the Eastern Sahel.

Where They Eat Cookies Made of Mud to Quench Hunger

The poor in Haiti have taken to eating cookies made of mud. It is also seen as an antacid and source of calcium.
Advertisement
The Republic of Niger, is a landlocked country in Western Africa, named after the Niger River. But over 80 percent of the country is covered by the Sahara desert. Much of the non-desert portions of the country are threatened by periodic drought and desertification. The economy is concentrated around subsistence and some export agriculture clustered in the more fertile south, and the export of raw materialsespecially uranium ore. Niger remains handicapped by its landlocked position, desert terrain, poor education and poverty of its people, lack of infrastructure, poor health care, and environmental degradation.

A dramatic deterioration of the nutrition situation in the country has led to the World Food Programme (WFP) significantly expanding its programme with a sharp focus on the needs of malnourished children.

The long drought in the Sahel region of Africa has led to soaring levels of child malnutrition. According to a national survey in June, some 16.7 percent of all children under five do not get the vitamins and nutrients they need to be healthythe emergency threshold is 15 percent. In many of the worst-affected areas, however, the survey pointed to child malnutrition rates in excess of 20 percent.

"People in Niger have suffered intensely from this protracted drought," said   WFP  West Africa spokesman Thomas Yanga. "It's critical to provide for the needs of these malnourished children."

To address the emergency, WFP is targeting under-fives with a specialized blend of corn-soya meal fortified with the micronutrients their growing bodies need. WFP is also providing a ration of staple cereals, pulses and oil to older members of the family to ensure that everyone gets enough.

Nowhere are the scars of drought in Niger deeper than in the pastoral Diffa region, where the bodies of sheep, cattle and even camels bare grim testimony to the hardships facing local herders. Their flocks dwindling and food prices rising, these families are among nearly 8 million people WFP plans to feed this year

WFP is aiming to reach almost 8 million people with food assistance over the next 6 months.  The expanded operation will provide special nutritionally enhanced products to approximately 1 million malnourished children under 2 years of age, while their families will receive standard food rations.

The expanded programme seeks to address the results of two surveys  showing that the number of people facing hunger in Niger had dramatically increased beyond earlier assessment :  the annual Nutrition and Child Survival survey released on 24 June - which highlight a serious deterioration in the nutritional status of children under five -  and the government 'Household Food Security' published in May.

The Nutrition and Child Survival survey found that the Global Acute Malnutrition* (GAM) rate among under-fives in Niger is 16.7 percent, compared to a rate of 12.3 percent in 2009.  This means it has gone well beyond the 15 percent threshold considered an emergency by the World Health Organization.

In areas badly affected by the drought, ( Diffa, Maradi, Zinder and Tahoua), one in five children in the under 5 age group is malnourished.  The average infant mortality rate is still less than 2 per 10,000 (the critical threshold) in most areas, but it has exceeded the 2 per 10,000 in the Tahoua region. The risk of high infant mortality rates is real.
WFP's Emergency Operation aims to reduce high malnutrition rates among vulnerable groups. It will provide blanket supplementary feeding to almost 1 million children under the age of two.

Households with children under two will receive both specialist supplementary feeding products to boost nutrition and a general ration of staple foods.  The idea is to make sure the children receive the nutritional products designed for them and to avoid the nutritional benefit being diluted by being divided among family members.

In 2005, Niger suffered from a severe food security crisis aggravated by drought and locust invasions. The crisis resulted in a dramatic reduction in household food consumption, sales of livestock and other assets, higher than normal emigration as well as rising levels of acute malnutrition and admissions to health centres. This time it could be worse, the UN agency said and appealed for more help for the affected people.