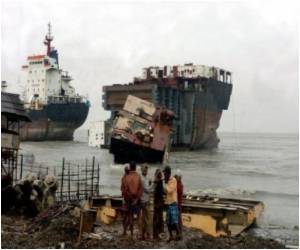 New Zealand could be facing its worst maritime pollution disaster as the stranded cargo ship Rena splits into two pieces.

The vessel had struck Astrolabe Reef off the North Island resort area of Tauranga in October last.

Officials said heavy seas had snapped off the stern section of the Greek-owned Rena, which leaked large amounts of oil on becoming stranded in October.


The Astrolabe Reef, which breaks the water surface at low tide, is a renowned scuba diving spot that drops off to 37 metres in different parts. Ironically, the reef was named by Jules Dumont d'Urville after his ship Astrolabe, when it nearly ran aground there on 16 February 1827.
Advertisement
"Overnight, the vessel was hit by wave action of up to 6m, heavy winds and heavy seas. That's caused the ship to break into two parts," Maritime New Zealand spokesman Ross Henderson told the BBC.

"The forward section remains firmly grounded on the reef, but the rear section has broken away."

Mr Henderson said the two parts of the ship were now 20-30m apart.

"What we do know is there's been a significant release of containers and container debris.

"We don't yet know what amount of oil may have been released, but we are gearing up for an expected release of oil and container debris on shore, and have response teams ready to go once that starts happening."

When the Rena ran aground, about 350 tonnes of oil spilled into the sea and was washed on to once-pristine beaches, killing at least 1,300 birds while an army of volunteers searched the coastline to save hundreds more.

More than 1,000 tonnes of oil have since been pumped off ship but there is more on board, AFP reports.

Attempts were being made to tag the containers as it was too rough to tow or recover them and a navigational warning had been issued to shipping.

The regional harbour master was also considering extending the three nautical mile exclusion zone set up around the Rena because of the large field of debris flowing from the ship.

The Filipino captain and second officer of the Rena have been arrested and face multiple charges over the grounding, including operating a vessel in a manner causing unnecessary danger or risk.

They have also been charged with attempting to pervert the course of justice, which carries a seven-year jail term, amid accusations documents were altered after the grounding.

Hearing Loss Calculator Vent Forte (Theophylline) The Essence of Yoga Accident and Trauma Care Turmeric Powder - Health Benefits, Uses & Side Effects Blood - Sugar Chart Sanatogen Drug - Food Interactions Find a Doctor Pregnancy Confirmation Calculator
This site uses cookies to deliver our services. By using our site, you acknowledge that you have read and understand our Cookie Policy, Privacy Policy, and our Terms of Use