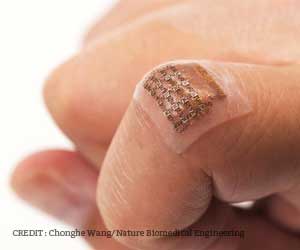 Newly developed wearable ultrasound patch can measure your blood pressure accurately, reports a new study. The findings of the study are published in the journal Nature Biomedical Engineering.

NIBIB-funded researchers are literally breaking barriers using ultrasound waves emitted from a flexible patch to accurately measure central blood pressure and help detect cardiovascular problems earlier. For a while now, smart, wearable devices have had the ability to capture how many steps we take in a day or measure our heart rate, but researchers are starting to take it a step further.

"Using ultrasound to measure blood pressure is not a new concept," explains Randy King, Ph.D., director of the program in Ultrasound at the National Institute of Biomedical Imaging and Bioengineering (NIBIB). "But in this research, the scientists have taken an innovative approach to couple ultrasound with wearables to engineer their prototype. Other blood pressure ultrasound methods are limited by a handheld probe operated by a technician, which can lead to inaccurate and variable readings."


When asked about blood pressure, most think about an inflatable cuff that wraps around the upper arm, which measures peripheral blood pressure. Rather than assessing pressure value at peripheral sites, the central blood pressure measurement requires the recording of blood flow in the aorta near the heart. The central blood pressure can be a critical vital signal for assisting detection and diagnosis of heart problems.
Advertisement
However, obtaining a central blood pressure is not always easy. Other non-invasive devices can measure the flow of blood in major vessels near the aorta but do not always give accurate readings. Often, readings vary between tests and technicians because the device is required to be held at very particular angles and pressures to obtain the best measurements. The most accurate method requires an invasive procedure where a sensor is inserted into the aorta through an artery in the groin or wrist.

"We have only been scratching the surface with wearable devices so far. They haven't yet been used to detect vital signs below the skin surface," said Sheng Xu, Ph.D., the study's senior investigator, from the University of California San Diego, "but my team is ready to tackle that challenge." Xu's team published their work in Nature Biomedical Engineering.

A silicone patch capable of emitting ultrasound waves, up to a depth of about 1.5 inches, can monitor blood pressure waveform by continuously recording the diameter of a pulsating blood vessel. As graduate student, Chonghe Wang explained, "Our approach to the design of the patch was unconventional. In order to make our device flexible and stretchable, we needed to bridge rigid, electronic "islands" with spring-like copper wires." This design is named an island-bridge structure. As electricity passes through the "islands," transducers emit the ultrasound waves.

Customized software translates the recorded measurements into a blood pressure waveform to show changes in blood pressure. The peaks and valleys of a waveform represent heart activity which is used to indicate cardiovascular problems, such as hypertension, heart disease, and valve dysfunctions.

So far, researchers have had success testing the patch on the neck, forearm, wrist, and foot of a study participant. The patch performance was similar while participants were stationary or exercising, which researchers attribute to its flexibility and unique design.

Currently, electricity to the patch is delivered through external wires that are hooked up to a power source and readings are sent back to data processing units. Xu said, "I am optimistic that someday this device will be empowering to patients and improve public healthcare, but there are still barriers to get this to the bedside." Currently, his team is attempting to make the device wireless by incorporating a power source, wireless communication, and data processing units into the patch.

Source: Newswise
Advertisement
<< UAE Parents want Ban on Smartphones in Schools for Under-16 ...
Number of American Teens Who Vape is Growing at an Alarming ... >>

High Blood Pressure Can be Diagnosed and Managed by Home Monitoring
Home readings of blood pressure can be used to diagnose and monitor hypertension (elevated blood ......