Number of American Teens Who Vape is Growing at an Alarming Rate: Survey 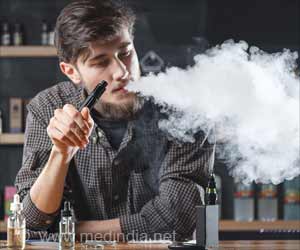 America's teens report a dramatic rise in their use of vaping devices in just a single year, reports a new survey. The findings come from the 2018 Monitoring the Future (MTF) survey.

Advertisement
‘Vaping has become epidemic among US high schoolers. A new study finds that teenagers who vape may be at risk for transitioning to regular cigarettes. Hence, aggressive educational intervention should be given on all products containing nicotine. ’
Read More..

These findings come from a nationally representative sample of eighth, 10th and 12th graders in schools nationwide, funded by a government grant to the University of Michigan, Ann Arbor. The annual results were announced today by the director of the National Institute on Drug Abuse (NIDA), part of the National Institutes of Health, along with the scientists who lead the research team.


Reported use of vaping nicotine specifically in the 30 days prior to the survey nearly doubled among high school seniors from 11 percent in 2017 to 20.9 percent in 2018. More than 1 in 10 eighth graders (10.9 percent) say they vaped nicotine in the past year, and use is up significantly in virtually all vaping measures among eighth, 10th and 12th graders. Reports of past year marijuana vaping also increased this year, at 13.1 percent for 12th graders, up from 9.5 percent last year.
Advertisement
"Teens are clearly attracted to the marketable technology and flavorings seen in vaping devices; however, it is urgent that teens understand the possible effects of vaping on overall health; the development of the teen brain; and the potential for addiction," said Nora D. Volkow, M.D., director of NIDA. "Research tells us that teens who vape may be at risk for transitioning to regular cigarettes, so while we have celebrated our success in lowering their rates of tobacco use in recent years, we must continue aggressive educational efforts on all products containing nicotine."

The percent of 12th graders who say they vaped "just flavoring" in the past year also increased to 25.7 percent in 2018 from 20.6 percent in 2017. However, it is unclear if teens know what is in the vaping devices they are using since the most popular devices do not have nicotine-free options, and some labeling has been shown to be inaccurate. There was also a significant jump in perceived availability of vaping devices and liquids in eighth and 10th graders, with 45.7 percent and 66.6 percent, respectively, saying the devices are "fairly easy" or "very easy" to get.

There is more information on the survey's vaping findings in this week's issue of The New England Journal of Medicine. In a letter to the editor written by Dr. Richard Miech, the MTF study team lead. Dr. Miech points out that the one-year increases in the prevalence of nicotine vaping translate into approximately 1.3 million additional adolescents who vaped in 2018, as compared with 2017. The increase in vaping rates between 2017-2018 also aligns with the recently released CDC/FDA government-funded National Youth Tobacco Survey.

This year's survey shows regular tobacco is still at its lowest point in the survey since it began measuring it, with only 3.6 percent of high school seniors smoking daily, compared to 22.4 percent two decades ago. Smoking tobacco with a hookah is significantly lower than five years ago, at 7.8 percent in the past year among high school seniors, compared to 21.4 percent in 2013.

The alarming news about vaping is in sharp contrast to the good news about teenage opioid use. The past year use of narcotics other than heroin (i.e., prescription opioids) is at 3.4 percent among 12th graders--a significant change from 4.2 percent in 2017. Only 1.7 percent of high school seniors report misuse of Vicodin in the past year, compared to a peak of 10.5 percent 15 years ago. It is also important to note that heroin use in all three grades remains very low with only 0.4 percent of 12th graders reporting past year use. "With illicit opioid use at generally the lowest in the history of the survey, it is possible that being in high school offers a protective effect against opioid misuse and addiction," said Dr. Volkow. "We will be focusing much of our new prevention research on the period of time when teens transition out of school into the adult world and become exposed to the dangerous use of these drugs."

Marijuana and Other Drugs

Close to 1 in 4 high school seniors reported the use of an illicit drug in the past month, led by marijuana use. Rates of overall marijuana use are steady, with 5.8 percent of 12th graders reporting daily use. Daily use of marijuana has been reported by high school seniors for the past 20 years at somewhere between 5.0 and 6.6 percent. Past year rates of marijuana use are generally steady among sophomores and seniors, showing as 27.5 percent for 10th graders and 35.9 percent for 12th graders. However, there is a significant five-year drop among eighth graders--from 12.7 percent in 2013 to 10.5 percent in 2018. There continue to be more 12th graders who report using marijuana every day than smoking cigarettes (5.8 percent vs. 3.6 percent), and only 26.7 percent of 12th graders think regular marijuana use offers the great risk of harm.

Other illicit drugs, including cocaine, synthetic cannabinoids, and MDMA remain close to historic lows. Inhalants, the only drug category that is usually higher among younger teens, is reported at 4.6 among eighth graders, compared to a peak of 12.8 percent in 1995.

There is positive news related to teen drinking with just 17.5 percent of 12th graders saying they have been drunk in the past 30 days, down significantly from five years ago, when it was reported at 26 percent. Reports of binge drinking (five or more drinks in a row in the past two weeks) are down significantly among 12th graders, at 13.8 percent down from 16.6 percent in 2017, and compared to 31.5 percent when the rates peaked in 1998. These findings represent the lowest rates seen for these alcohol measures since the survey began asking the questions.

"We are encouraged to see continued declines in a variety of measures of underage alcohol use," said George F. Koob, Ph.D., director of the National Institute on Alcohol Abuse and Alcoholism. "The new data, however, underscore that far too many young people continue to drink at a time in their lives when their brains and bodies are quite vulnerable to alcohol-related harms. We remain committed to developing and improving strategies to prevent the onset of drinking among youth so that more young people can be spared the consequences of alcohol misuse."

The MTF survey releases findings the same year the data is collected. It has been conducted by researchers at the University of Michigan at Ann Arbor since 1975.

Overall, 44,482 students from 392 public and private schools participated in this year's MTF survey. Since 1975, the survey has measured drug, alcohol, and cigarette use and related attitudes in 12th graders nationwide. Eighth and 10th graders were added to the survey in 1991. Survey participants generally report their drug use behaviors across three time periods: lifetime, past year, and past month. NIDA has provided grant funding for the survey since its inception.

E-Cigarettes May Help Even Die Hard Smokers Kick the Habit
Switching to vaping or e-cigarettes may help smokers to eventually quit the habit and stay that way ...

E-cigarette Vaping Can Delay Wound Healing
Exposure to e-cigarette vaping is equally harmful as traditional cigarettes and can delay wound ......

Cigarette Smoking Rate Declines in US Due to Increased Vaping Popularity
Due to the vaping being widespread, cigarette smoking among young adults has reduced in the United ....