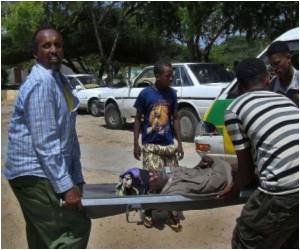 Progress has been made toward understanding the physiological mechanisms that underlie Gulf War illness and identifying possible treatments.

This is according to a report released by a Congressionally mandated panel of scientific experts and veterans. Treatment research has increased significantly since 2008, and "early results provide encouraging signs that the treatment goals identified in the 2010 Institute of Medicine report are achievable," the Research Advisory Committee on Gulf War Veterans' Illnesses (RAC) said in a report presented Monday to VA Secretary Eric Shinseki by the Committee's scientific director, Roberta White, chair of environmental health at the Boston University School of Public Health.

The Institute, part of the National Academies of Sciences, had forecast that "treatments, cures, and hopefully preventions" could likely be found with the right research.


The RAC report updates scientific research published since the Committee's landmark report in 2008, which established that Gulf War illness was a real condition, affecting as many as 250,000 veterans of the 1990-91 Gulf War.
Advertisement
"The conclusions of the 2008 RAC report had a substantial impact on scientific and clinical thinking about Gulf War illness, as well as the public acceptance of this disorder," said White. The earlier report documented a number of studies that found evidence linking the illness to exposure to pesticides and pyridostigmine bromide (found in anti-nerve gas pills given to troops), as well as other toxic sources.

"Studies published since 2008 continue to support the conclusion that Gulf War illness is causally related to chemical exposures in the combat theater," White said of the new report. "And many studies of the brain and central nervous system, using imaging, EEG and other objective measures of brain structure and function, add to the existing evidence that central nervous system dysfunction is a critical element in the disorder. Evidence also continues to point to immunological effects of Gulf War illness."

Exposure to the nerve gas agents sarin and cyclosarin has been linked in several studies to changes in magnetic resonance imaging (MRI) that are associated with cognitive impairments -- further supporting the nervous-system effects of those agents cited in the 2008 report.

"The Committee concludes that the evidence to date continues to point to alterations in central and autonomic nervous system, neuroendocrine, and immune system functions," the report says.

In addition, the Committee said, new evidence has emerged suggesting that certain exposures may be linked to brain cancer in Gulf War veterans. Studies show that veterans who were most exposed to the release of nerve gas during the destruction of the Khamisiyah arms depot in Iraq have significantly elevated rates of death due to brain cancer.

Veterans who were exposed to the highest level of contaminants from oil well fires also have increased rates of brain cancer deaths, the report says.

The Committee encouraged studies exposing animals to toxic agents involved in Gulf War illness "because they can help to determine treatment targets in subgroups of veterans with specific exposures, for which there are known mechanistic pathways that cause illness and symptoms."

In addition, "results from this work can be useful in protecting the health of future military personnel who will experience these exposures, as well as non-military populations with occupational or environmental exposures."

While the RAC panel applauded an increase in the number of treatment studies funded by the Department of Defense's Congressionally Directed Medical Research Program, it expressed grave concerns about a lack of research on other health problems and mortality among Gulf War veterans.

"Very little research" has been conducted to determine rates at which veterans have been affected by neurological diseases such as multiple sclerosis or Parkinson's disease, cancers, and reproductive problems, the panel said.

"No comprehensive information has been published on the mortality experience of U.S. Gulf War era veterans after the year 2000," according to the report.

Gulf War illness refers to the chronic symptoms that affect veterans of that conflict at markedly elevated rates, compared to other veterans' groups and to the U.S. population as a whole. Symptoms can vary from person to person, but typically include some combination of widespread pain, headache, persistent problems with memory and thinking, fatigue, breathing problems, stomach and intestinal symptoms, and skin abnormalities.

Gulf War Illness Have Impaired Function of Mitochondria
Researchers at the UC San Diego School of Medicine have demonstrated for the first time that ......

Gulf War Illness Linked to Mitochondria Dysfunction: Study
Researchers at UC San Diego School of Medicine have found out that Gulf War illness is caused due .....