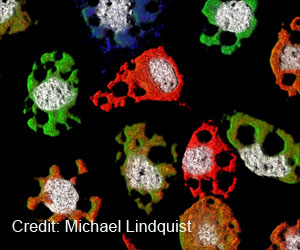 The discovery of a newer multicomponent virus from mosquitoes known as the Guaico Culex Virus (GCXV), a type of Jingmenvirus (segmented virus) is found to infect animals. The study conducted by an international team led by the U.S. Army Medical Research Institute of Infectious Diseases (USAMRIID) was published in Cell Host & Microbe paper.

"Until now, multicomponent viruses were thought to infect only plants and fungi, as a result of relatively inefficient transmission," says first author Jason Ladner, a staff scientist from the U.S. Army Medical Research Institute of Infectious Diseases (USAMRIID). "Our finding that these viruses are present in mosquitoes is going to challenge us to re-evaluate some of our assumptions about them."


Multicomponent viruses use a method of transmission that's different from other viruses known to infect animals. Instead of being contained in a single viral particle, their genomes are segmented and encapsulated among multiple particles. A yellow fever virus, for example, has all its genetic material packaged into a single particle. Therefore, one particle is enough to infect a cell. But in order for a multicomponent virus to establish an infection, the cell has to get infected with at least one particle of each type.


The research is part of a global effort to monitor and prepare for outbreaks of unknown viral diseases. Mosquitoes and other insects can act as vectors for viral diseases, carrying them from place to place and transmitting them to human hosts via bites. Although the new virus does not appear to be a human pathogen, or even a mammalian one, the investigators say this work is a good exercise to help hone the tools and expertise needed to characterize novel infectious agents.

In the study, the USAMRIID researchers worked with several other teams, including groups from the University of Texas Medical Branch and the New York State Department of Health, to isolate mosquitoes from different regions around the world. The newly discovered virus is named Guaico Culex after the Guaico region of Trinidad in which the mosquitoes that contained it were found.

Guaico Culex was isolated by growing material obtained from the mosquitoes in cell culture. "This method has been useful particularly in finding new arboviruses, which are transmitted by mosquitoes and other arthropods to mammals," Ladner says. To identify arboviruses, cultures of mammalian cells are used. "We were also interested in viruses that may be found within mosquitoes but don't necessarily grow on mammalian cells, so we used cultures of insect cells, enabling us to find this new virus."

Deep sequencing indicated that Guaico Culex belongs to a group of segmented viruses called Jingmenviruses, which were first discovered in 2014. In collaboration with a group at the University of Wisconsin-Madison, the USAMRIID researchers also showed for the first time evidence of a Jingmenvirus in the blood of a non-human primate, in this case a Ugandan red colobus monkey. This finding is also published in the current Cell Host & Microbe paper.

Experts believe that the most likely infectious viruses to make the jump to humans are those that are already circulating in other mammals, especially non-human primates. Phylogenetic analysis indicated that this monkey virus shared a segmented common ancestor with Guaico Culex. However, researchers don't yet know if all Jingmenviruses are multicomponent like the Guaico Culex virus. It is also not known whether the Jingmenvirus isolated from the monkey had a pathogenic effect.

"One of the things we're focused on at USAMRIID is rapid identification of pathogens from both clinical and environmental samples as well as characterization of novel viruses," says Gustavo Palacios, Director of the Center for Genome Sciences at USAMRIID and the study's senior author. "We're trying to make sure that we're not blindsided when the next virus comes around. With all of the diversity seen in these emerging viruses, we never know what the next one will be to have an impact on human health."