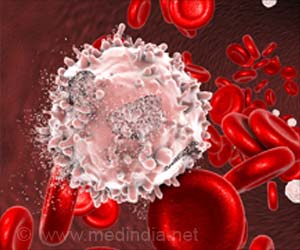 Hematopoietic stem cell (HSC) transplant is the only cure for patients with certain forms of leukemia. For those who undergo HSC transplants blood tests every day are the only way to assess whether the newly infused cells have survived and started to grow early healthy cells in the bone marrow, a process called engraftment. But a new study published in The Lancet Haematology suggests that a new imaging agent can safely show engraftment as early as days after transplant, giving a helpful and hopeful preview to patients and their doctors.

Leukemia can be a terrifying diagnosis for the more than 60,000 U.S. patients who are told they have this blood cancer every year. But the treatment for this disease can be just as frightening. For patients with certain forms of leukemia, the only chance they have for a cure is to receive a massive dose of radiation and chemotherapy that kills their hematopoietic stem cells (HSCs), the cells responsible for making new blood, and then receive new HSCs from a healthy donor.

While patients are waiting for these new cells to go to the bone marrow factory and begin churning out new blood cells, patients are left without an immune system. Devoid of working HSCs for two to four weeks--or longer, if a first transplant doesn't take--patients are vulnerable to infections that can be just as deadly as their original cancer diagnosis.


As they wait in the protected confines of a hospital, patients who undergo HSC transplants receive blood tests every day to gauge successful engraftment, searching for the presence of immune cells called neutrophils, explains Kirsten M. Williams, M.D., blood and bone marrow transplant specialist at Children's National Health System.
Advertisement
"As you head into week three post-transplant and a patient's cell counts remain at zero, everyone starts to get nervous," Dr. Williams says. The longer a patient goes without an immune system, the higher the chance that they'll develop a life-threatening infection. Until recently, Dr. Williams says, there has been no way beyond those daily blood tests to assess whether the newly infused cells have survived and started to grow early healthy cells in the bone marrow, a process called engraftment.

The study evaluated an investigational imaging test called 18F-fluorothymidine (18F-FLT). It's a radio-labeled analogue of thymidine, a natural component of DNA. Studies have shown that this compound is incorporated into just three white blood cell types, including HSCs. Because it's radioactive, it can be seen on various types of common clinical imaging exams, such as positron emission tomography (PET) and computed tomography (CT) scans. Thus, after infusion, the newly infused developing immune system and marrow is readily visible.

To see whether this compound can readily and safely visualize transplanted HSCs, Dr. Williams and colleagues tested it on 23 patients with various forms of high-risk leukemia.

After these patients received total-body irradiation to destroy their own HSCs, they received donor HSCs from relatives or strangers. One day before they were infused with these donor cells, and then at five or nine days, 28 days, and one year after transplantation, the patients underwent imaging with the novel PET/and CT scan imaging platform.

Each of these patients had successful engraftment, reflected in blood tests two to four weeks after their HSC transplants. However, the results of the imaging exams revealed a far more complicated and robust story.

With 18F-FLT clearly visible in the scans, the researchers saw that the cells took a complex journey as they engrafted. First, they migrated to the patients' livers and spleens. Next, they went to the thoracic spine, the axial spine, the sternum, and the arms and legs. By one year, most of the new HSCs were concentrated in the bones that make up the trunk of the body, including the hip, where most biopsies to assess marrow function take place.

Interestingly, notes Dr. Williams, this pathway is the same one that HSCs take in the fetus when they first form. Although experimental model research had previously suggested that transplanted HSCs travel the same route, little was known about whether HSCs in human patients followed suit.

The study also demonstrated that the radiation in 18F-FLT did not adversely affect engraftment. Additionally, images could identify success of their engraftments potentially weeks faster than they would have through traditional blood tests--a definite advantage to this technique.

"Through the images we took, these patients could see the new cells growing in their bodies," Dr. Williams says. "They loved that."

Besides providing an early heads up about engraftment status, she adds, this technique also could help patients avoid painful bone marrow biopsies to make sure donor cells have taken residence in the bones or at the very least help target those biopsies. It also could be helpful for taking stock of HSCs in other conditions, such as aplastic anemia, in which the body's own HSCs fade away. And importantly, if the new healthy cells don't grow, this test could signal this failure to doctors, enabling rapid mobilization of new cells to avert life-threatening infections and help us save lives after transplants at high risk of graft failure.

"What happens with HSCs always has been a mystery," Dr. Williams says. "Now we can start to open that black box."