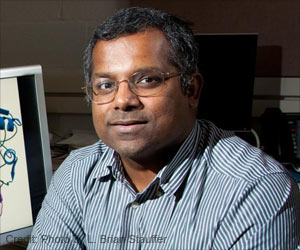 Protein-based drugs are commonly used for the treatment of various diseases like cancer, heart disease and rheumatoid arthritis. They are usually modified with chemical appendages to travel through the body or target specific tissues.

These platelet-mimicking nanoparticles are capable of delivering drugs to targeted sites in the body - particularly injured blood vessels, as well as organs infected by harmful bacteria.
Advertisement
‘Drug delivery can be improved by attaching lipid molecules to the protein based drugs.’

The new findings are reported in the Proceedings of the National Academy of Sciences.


"Medicinal chemistry has focused on using peptides as scaffolds for drugs because of the ease of their production and the chemical diversity of their amino-acid building blocks," said University of Illinois biochemistry professor Satish K. Nair, who led the new research with Thomas Cheatham and Eric Schmidt of the University of Utah. "However, peptides are generally ineffective drugs because they are poorly absorbed, cannot penetrate the blood-brain barrier and are easily broken down," Nair said.

Researchers have found that genetically modified probiotic bacterium lactobacillus may be used to deliver Angiotensin-(1-7) in pulmonary hypertension.
Advertisement
Attaching lipids "improves all of these properties, enabling peptides to be more druglike," he said. Current methods for attaching lipids to peptides require the use of either harsh chemical solvents or expensive biological catalysts.

Nair and his colleagues focused on a little-known group of enzymes isolated from water-dwelling bacteria that have the remarkable ability to add lipids to a wide variety of proteins. The team performed a series of experiments on one family of these enzymes to discover how they recognize and interact with the peptides they modify.

The researchers discovered that one type of enzyme recognizes a simple, two-amino-acid sequence within its target proteins. They added this motif to two peptides selected at random and exposed the peptides to the enzyme. This caused the enzyme to add a lipid appendage to the proteins. The transformation was fast and efficient.

"Now that we have a very efficient way of attaching lipids to peptides, this opens up the possibility of using this approach to make large libraries of molecules that are more druglike than peptides," Nair said.

Drug delivery systems, is a technology using various chemicals to bind the target drugs, carry them to target organ, tissue or cell where the drug is released at a pre-determined rate.

Selfie Addiction Calculator How to Reduce School Bag Weight - Simple Tips Calculate Ideal Weight for Infants Nutam (400mg) (Piracetam) Color Blindness Calculator The Essence of Yoga Find a Doctor Blood - Sugar Chart Pregnancy Confirmation Calculator Turmeric Powder - Health Benefits, Uses & Side Effects
This site uses cookies to deliver our services. By using our site, you acknowledge that you have read and understand our Cookie Policy, Privacy Policy, and our Terms of Use