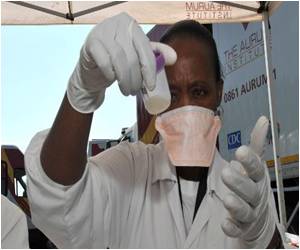 Consumption was one of the worst known diseases of the 18th century. Thanks to medical advances, the number of deaths from this lung disease - tuberculosis - has declined significantly.

Efforts to eradicate the disease in the 1950s and 1960s resulted in a wide range of new drugs entering the market.

Immunologists Make Progress in the Fight Against Tuberculosis

In the fight against tuberculosis -an infectious disease that is widespread the world over, leading immunologists expect to see some clear advances.
Advertisement

And yet 1.4 million people still continue to die each year from tuberculosis. Multidrug-resistant strains of the disease-causing pathogen are especially dangerous because they can no longer be treated with today's drugs. "In the past 50 years, only one new tuberculosis drug has come on to the market, and that was in 2012," says Karl-Heinz Altmann, Professor of Pharmaceutical Biology at ETH Zurich. New active substances that are able to kill multidrug-resistant strains of the disease are therefore urgently needed. Altmann and his team have now laid the foundation for new tuberculosis drugs, and they were inspired by a bacteria-derived antibiotic called pyridomycin.

Pyridomycin inhibits the growth of the tuberculosis pathogen Mycobacterium tuberculosis, but it is degraded relatively quickly and is therefore ineffective. However, by using the structure of pyridomycin, Altmann and his research group have designed a molecule that has several advantages over the natural active substance. The new molecule is more stable and is easier to produce synthetically; it can also serve as a lead structure for the synthesis and biological testing of further modified versions of the active substance. Drugs could eventually be developed that work efficiently and are well tolerated. They could also be adapted such as to overcome new drug-resistant strains of the tuberculosis pathogen. The researchers have applied for a patent for the new active substance's basic structure and the method of production.

Shorter tuberculosis treatment regimens will reduce the extra expenses incurred by both patients and their family members, who often act as the patients' guardians.
Advertisement
The researchers found inspiration from a long forgotten substance. In 1953, Japanese scientists discovered that pyridomycin inhibits the growth of the tuberculosis pathogen Mycobacterium tuberculosis. But the compound was not investigated further for decades thereafter. "Everyone behaved as though the tuberculosis problem was solved," says Altmann. While researching the literature, he came across the pyridomycin and worked together with a research team led by Stewart Cole, a professor of microbial pathogenesis at EPFL, to decode how it works.

It paralyses an important component of cellular metabolism, which is essential for building the cell wall of the tuberculosis pathogen. Although an available drug called isoniazid targets the same key protein , it must first be converted inside the tuberculosis bacteria into the actual inhibitor. Pyridomycin, in contrast, binds directly to the target protein and therefore circumvents pre-existing resistance mechanisms that prevent isoniazid from becoming activated. The new approach of the active substance enables a wide variety of structures for new drugs against tuberculosis.

Role of Ventilation in Preventing Tuberculosis Transmission in Focus by Scientists

Students in Cape Town, spending their day in poorly ventilated rooms, are at risk of transmission, say scientists studying in role of room ventilation in tuberculosis transmission.
Advertisement
<< Fish can Remember Things Even 12 Days Later
World Cup is All About Scoring on and Off the Pitch >>

Genetic Discovery Could Improve the Diagnosis Of Childhood Tuberculosis

Nutam (400mg) (Piracetam) Drug - Food Interactions The Essence of Yoga Loram (2 mg) (Lorazepam) Sanatogen Noscaphene (Noscapine) Iron Intake Calculator Turmeric Powder - Health Benefits, Uses & Side Effects Find a Doctor Pregnancy Confirmation Calculator
This site uses cookies to deliver our services. By using our site, you acknowledge that you have read and understand our Cookie Policy, Privacy Policy, and our Terms of Use