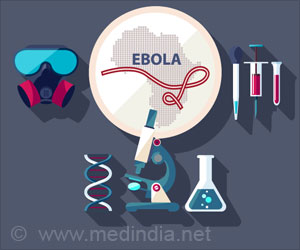 An innovative antibody delivery method delivers a monoclonal antibody gene to a cell using a viral vector called adeno-associated virus (AAV) and provides up to 100% protection against Ebola infection in mice.

More than 11,000 people died during the Ebola outbreak in West Africa from 2013-16, demonstrating both the deadly nature of the virus and the limitations of the medication used to fight it.

Advertisement
‘AAV gene therapy delivers the DNA blueprint for antibody production to a cell, which then produces a protective antibody against Ebola virus and protects against infection.’

The mice expressed the antibody for more than 300 days, revealed the study appearing in the Journal of Infectious Diseases.


"If you use an AAV gene therapy vector to deliver the DNA blueprint to a cell, that cell will produce a protective antibody against Ebola virus, which is then secreted into the bloodstream and protects mice from infection," said Sarah Wootton, Professor at the University of Guelph in Ontario, Canada.
Advertisement
Once the antibody gene is delivered, antibodies will be continually produced in the bloodstream.

"We are hoping to use this technology in a post-exposure scenario. Let's say someone has been exposed to Ebola. The idea would be to give them this AAV vector to start producing the antibodies that prevent death," Wootton noted.

Other researchers have used AAV extensively to treat a variety of genetic disorders.

The US Food and Drug Administration has recently approved an AAV gene therapy to treat a rare retinal disorder.

Source: IANS
Advertisement
<< Sanitary Pads to All Women in Rural Communities at Re.1 Each...
Cycling: Number One Cause of Cervical Fractures in Men >>

New Enzyme Identified That Could Stop Ebola Spread
Scientists have found that an enzyme could help prevent Ebola virus from spreading, while raising .....

New Biomarkers Can Predict Risk of Death in Ebola Patients
Newly identified biomarkers can indicate if the patients with Ebola virus would live or die and ......

Human Cognition can Affect the Spreading Of Ebola
The World Health Organisation and the Centre for Disease Control had different approaches to ......