Nepal's Children Are Being Rescued from Behind Bars By A Mother 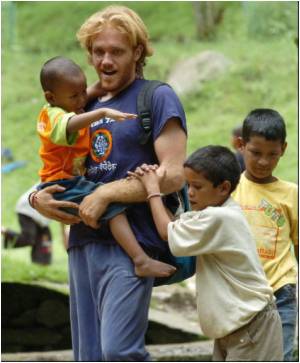 Mothers peel vegetables and wash clothes in the pale winter sunshine while inside a crumbling brick-walled compound in the heart of Kathmandu, children chatter and play hopscotch in the dust.

It could be a scene from any poor estate in the Nepalese capital, except that these children are locked behind razor wire, innocent victims of a prison system that often incarcerates the infant sons and daughters of women who are jailed.

There are 300 inmates in the overcrowded, dilapidated Kathmandu Women's Prison, and 15 children who are among dozens across Nepal serving time because, with their sole carer in jail, they have nowhere else to go.


But there is hope, in the shape of Indira Rana Magar, who over 12 years has offered sanctuary, education and a better life to more than 500 youngsters who have been dealt the worst possible start in Nepal's filthy, run-down jails.
Advertisement
In a holding area in the penitentiary, Nepal's only women's prison, inmates sit with their children on their laps, preparing to say goodbye before handing them over to Magar.

Among them is Sapana Bhandari, 22, who says she was jailed for 10 years for her "involvement in the sex trade" and doesn't want her four-year-old son to grow up in prison.

"If I send him to the shelter, he will not only have a proper education but will also lead a normal childhood," Bhandari tells AFP.

Letting her child go is a wrench, but Bhandari knows 41-year-old Magar will offer the young boy more than she ever could.

Growing up behind the high walls of Kathmandu Women's Prison is tough. There is no school and children are crammed into cells of up to 20 women where daily existence is a constant battle for space.

Magar set up Prisoners Assistance Nepal 13 years ago and runs three homes, including a three-storey red-brick building on the edge of Kathmandu, which houses more than 60 children aged from three to 15 whose parents are in jail.

A workforce of carers and teachers give the youngsters routine, make sure they are fed and clothed, and teach them the discipline and self-respect to ensure that, in most cases, they do not return to life behind bars.

Usha Turaha, 26, a single mother jailed for smuggling heroin from India, also hands over her five-year-old daughter to Magar, thrusting chocolate, a box of noodles and a biscuit into the girl's arms.

"I trust (Magar) because jail is not good for a child. There's no school and she will learn how to read and write," Turaha says before giving her daughter one last hug.

Magar brings the children to the shelter, and is surrounded as she opens the gate by a crowd of youngsters who call her "aama" -- "mother" in Nepali.

"We want to give them a normal childhood and a family environment. We also train them on life skills so that they don't have to be idle when they leave," she says, gesturing to a plot of land where the children learn to grow vegetables.

Magar, herself a single mother, is no stranger to the deprivation experienced by many of her young charges, having grown up in a poor farming family in eastern Nepal and having been forced to pay for her own schooling by working as a maid.

She found herself making rounds of prisons in the 1990s as a volunteer helping political prisoners and saw first-hand the plight of children languishing in cells.

The work of charities rescuing children from Nepal's prisons was given welcome publicity when Pushpa Basnet, 28, who runs a similar centre in Kathmandu, won 2012's CNN Hero of the Year prize as a result of a worldwide online poll.

But Magar's charity gets no cash from the Maoist government of Nepal, one of the world's poorest countries scarred by 10 years of civil war.

Her 10-million-rupee ($117,647) shelter has been built up from donations and international funding.

"I would very much like the government to take over the infrastructure. But going by its past record, that seems unlikely," she said.

"So, I hope one of our graduates, or even a group of them, take charge and run the shelter in the future."

About 80 children are locked up with their mothers in 74 prisons across the country, with majority of them toddlers, according to UNICEF.

Nepal allows women prisoners to keep the child in jail and the jail authorities are required by law to pay for their education in care.

But officials at the Women's Prison acknowledged that the provisions have not been fully implemented due to lack of government funds.

More News on:
Height and Weight-Kids The Magic Feeling of Being A Mother