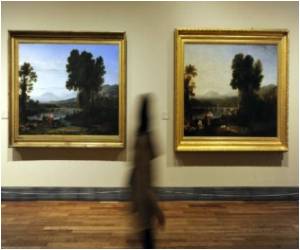 The National Archives, America's repository of historical artifacts, has received a donation of a photo album depicting troves of precious art works looted by the Nazis during World War II.

The album is one of 39 "Hitler albums" -- essentially a catalogue of art confiscated by troops operating under orders from Der Fuerher.

The book contains photos of looted paintings and other cultural artifacts swiped from France.


The album was given to the National Archives at a ceremony that fell on the anniversary of the war's end in Europe.

The event was attended by Harry Ettlinger, 88, one of six surviving soldiers from a US army unit tasked with recovering thousands of art works confiscated by the Nazis.

Sale of $11.5 Million Picasso Painting Blocked By US Government

The US government said that US authorities blocked the sale of a Pablo Picasso painting following a request from Italy.
Advertisement
The album showed page after page of black and white photographs, images, in this case, of artwork stolen from France. The leather-bound book was recovered from one of Hitler's homes.

The album was donated to the National Archives by the "Monuments Men" Foundation, whose mission is to disseminate the story about the lost works of art and the Allied soldiers who helped recover them.

The story of the military's art recovery units was popularized in the movie "The Monuments Men," written by and starring George Clooney. The film opened across US movie screens in February.

The photo albums served as important evidence of Nazi crimes, and were used at war trials to show the extent of pillaging and looting carried out by the Nazis during the war.

A billionaire in Las Vegas is suing a respected Swiss curator accused of standing behind the authenticity of a painting purportedly by American artist Mark Rothko which turned out to be fake.
Advertisement
<< US Regulators Give Nod for Advanced Prosthetic Arm
First Ikea Shop in Sweden to be Converted into Museum >>

For Abstract Painting 'Brent' The Chimpanzee Won 10,000 Dollars as Prize