Musical Extravaganza To Be Performed At London 2012 Closing Ceremony 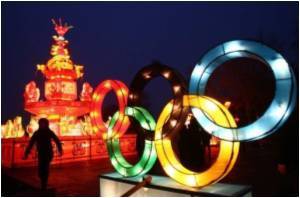 It has been revealed that the Olympic closing ceremony will see a host of big performers including Russell Brand, Kate Moss, Coldstream Guards and stripping lollipop ladies.

While precise details of the event at the Olympic Stadium on August 12 are still a closely guarded secret, a working set list suggests it will be a two-hour musical and theatrical extravaganza.


For younger music fans there are likely to be appearances by Emeli Sande - who at present is due to open the show with her hit 'Read All About It' - Kaiser Chiefs, One Direction, Elbow, Ed Sheeran, Tinie Tempah and Jessie J.he Who are currently scheduled to close the show while ballerina Darcey Bussell and 300 dancers from the Royal Ballet perform The Spirit of The Flame as the Olympic Flame is put out.

Russell Brand is scheduled to perform a comedy version of the Sex Pistols' song 'Pretty Vacant' with Dawn French and Jennifer Saunders - all in full punk get-up.

Brand is also due to perform The Beatles' song 'I Am The Walrus.'

A tribute to British fashion will see supermodels Kate Moss, Naomi Campbell, Stella Tennant, Lily Cole and Georgia Jagger strut down a catwalk to the David Bowie songs 'Fashion' and 'Rebel Rebel,' although the singer himself will not be there.

The opening moments of the ceremony will see versions of London landmarks such as Big Ben, St Paul's Cathedral and the London Eye, all of them covered in newspaper, being unwrapped by a cast of hundreds.

An estimated 300 performers will take part in a routine based on the capital's rush hour, with cars, scooters and bicycles hurrying around the main stage while lollipop ladies direct the tooting traffic and road workers drill the pavements.

Then, to a potentially controversial Full Monty-style rendition of the National Anthem, the performers will strip off their costumes - the lollipop ladies will reveal Union Jack-themed swimsuits, while the commuters and road workers will be in similarly patriotic bodysuits and other outfits.

The Queen has yet to confirm her attendance in the Royal Box, where she would join London 2012 chief Lord Coe and President of the International Olympic Committee Jacques Rogges.

The Notting Hill Carnival will also be re-enacted on stage and there will be a parade of 160 Coldstream Guards who are currently due to march to a military band rendition of Blur's Park Life.

Madness will sing their hit 'Our House' - after raising the roof at Buckingham Palace with the same tune at the Queen's Diamond Jubilee concert last month.

And veteran singer Ray Davies is presently scheduled to sing his Kinks' hit 'Waterloo Sunset' as the London skyline is transformed into a funfair and 270 children in costume recreate the River Thames.

As with the opening ceremony on July 27 there will be a parade of national flags led by Greece while Elbow perform 'One Day Like This.'

Organisers have also planned a parade of 10,000 athletes and a Victory Ceremony during which footage of the highlights of the two weeks' Games will be screened.nlarge

When the Victory Ceremony comes to a close there is due to be a sudden blackout followed by the opening chords of 'Bohemian Rhapsody.'

Also due to be part of the show is a tribute to John Lennon, with footage of the late Beatle talking being screened in the stadium.

According to the latest running order, the acts appearing near the finale are Take That, who are due to sing 'Rule The World,' and Queen, who will perform 'We Will Rock You' with Jessie J.

The band's late lead singer Freddie Mercury will appear as a projection.

Celebrating the Olympics' birthplace, the Greek national anthem will be played.

Women Athletes in Britain Slowly Taking Center Stage as Olympics Beckon
Photos of heptathlete Jessica Ennis, one of Britain's best hopes for an Olympics gold medal, are everywhere -- but they can't hide the gap that remains between men and women in British sport.
READ MORE

Short Duration Attracts Women to Watching Olympics
Short durations and "feminine" appearance are the reasons why women are more likely to watch sporting events such as Olympics instead of season-long sports, a new study reveals.
READ MORE