Music Breathes Life Back Into New Orleans After Katrina 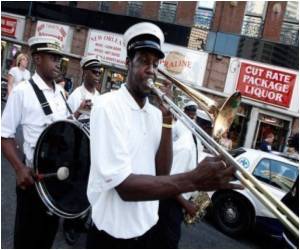 The historic French Quarter in New Orleans filled with music pouring from dozens of competing clubs as the afternoon faded five years after Hurricane Katrina devastated the city.

Notes of brass and piano on Frenchmen Street showed off a robust scene that is attracting hordes of musicians -- and tourists -- back to the city despite the horrors of the past and the harsh economic times. 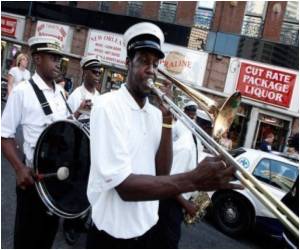 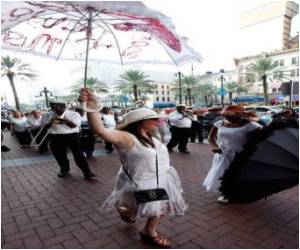 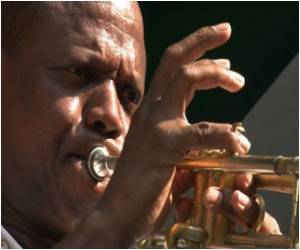 Five years after Katrina, New Orleans jazz gets back its swing

Blocks away, lawns and side streets were packed with late summer festival-goers celebrating the birthday of jazz great Louis Armstrong, a New Orleans native.


Trumpet player Leroy Jones, a long-time figure in the New Orleans jazz community, played old standards mixed with his own newer work to an excited crowd.
Advertisement
"The energy is back. The creativeness is probably even more prolific now," said Jones, wiping the sweat from his brow in the thick heat.

Jones and his wife, a trombone player, evacuated the city two days before Katrina made landfall on August 29, 2005.

His first gig when he returned home six weeks later was a "jazz funeral" parade to symbolically bury a hurricane season that ravaged the city and took the lives of more than 1,500 people.

Jones said there was no music scene at all in the aftermath of the disaster and, for many, the recovery only now feels complete.

"We've had a great year, but it has taken until this year," said Kathy Edegran, manager of the upscale Palm Court jazz club.

The Palm Court was one of the first clubs to reopen, less than two months after the floods.

Solidarity and dedication to bringing New Orleans back was clear to Edegran from the first. She said a handful of the club's regular musicians were playing for free to an often empty room for months.

"They needed to play just to get their minds off Katrina and everything else that was going on," she told AFP.

Barely eight months after the hurricane, with broad swathes of the city still without basic services, New Orleans came together to host a cherished ritual: the New Orleans Jazz and Heritage Festival, an annual music marathon known as Jazzfest.

More than 100 bands, from the home grown like Dwayne Dopsie & the Zydeco Hellraisers, to international superstars like Gipsy Kings, gather each year for two weeks of musical rapture.

In 2006 Bob Dylan, Bruce Springsteen, and Hugh Masekela performed at Jazzfest to help trumpet a turning point in the New Orleans recovery, but the event masked the deep losses to the city and its musical heritage.

The Big Easy may be hopping again now, but drummer Lawrence Batiste said the biggest thing missing was the many musicians who never returned, some because they died while living apart from New Orleans.

"They grieved the city," said Batiste, standing outside the Palm Court as a group of his colleagues took the stage on the club's last night before closing for a summer holiday.

"I'm sure they died of broken hearts because they couldn't get back to New Orleans. New Orleans is a very seductive place. It's like being in love with a woman and she quits you, and so your heart's broken."

In a city with music at the core of its identity, special measures have been taken to help musicians resettle.

The housing non-profit Habitat for Humanity has built 72 brand-new homes in a Musicians' Village in the Lower Ninth Ward.

The hard-hit neighborhood was home to many artists before the storm, but has only recovered a quarter of it's pre-Katrina population, according to local data.

Still, there is no doubt that the undying lure of the city still tugs at musicians' hearts.

"It's kind of exciting because a lot of people like me came down after because they want to be part of something," said jazz musician Ben Polcer in between sets at The Spotted Cat, a small club on Frenchmen Street.

Polcer, who moved to New Orleans from New York in 2008, said the sheer quantity of working musicians in this town makes New Orleans a special place that will keep on playing, whatever the weather.

"This always has been and probably always will be the music town of the country," he said, before turning back to his piano.

Psychological Distress Rampant Among Katrina Victims Who Lost Homes
An American researcher of Indian origin and his colleagues have found New Orleans who lost their ......

Katrina Has Caused Severe Emotional Disturbances in Children
A study conducted by mental health professionals has revealed that children who faced the onslaught ...

Katrina Devastated New Orleans Limping Back to Normalcy
Stroll through the French Quarter and it's easy to forget the devastation wrought by Hurricane ......