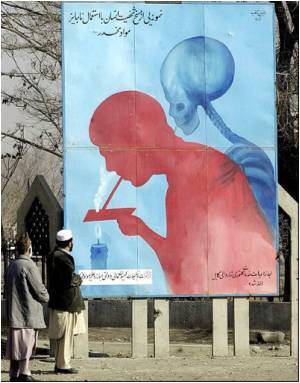 Clandestine manufacturers or 'cooks' of methamphetamines typically wash toxic waste from the production of the drug down drains or dump it untreated into the environment, say Professor Ravi Naidu and Professor Megharaj Mallavarapu. of the Cooperative Research centre for Contamination Assessment and Remediation of the Environment (CRC CARE)

To marshal worldwide support for the control of drugs, the 26th of June every year is devoted to the cause, known as the International Day against Drug Abuse and Illicit Trafficking.
Advertisement

The places where the drugs are 'cooked' - usually rental houses or flats - can become contaminated with volatile chemicals that may endanger the health of subsequent residents, who may be completely unaware their home has been used as a drug factory.


"In New Zealand, they have recently torn down several houses where drugs were made because they were so polluted it would be hazardous for anyone to live there afterwards.

Drug Abuse Screening Test (DAST) is a screening test to find out if you need professional help with 'Drug Abuse' problem. This is only an anonymous self test.
Advertisement
"So this is also a serious issue for landlords, who can find themselves facing legal action, clean-up costs of $150,000 or more, a huge drop in property values or even their building being razed to the ground, as a result of an activity which they knew nothing about," the duo noted

Since the toxic cycle depends on the demand created by recreational drug consumers, there needs to be much greater public education about these damaging 'side-effects' of what many regard as a private and relatively harmless activity.

"The issue is similar to video piracy, where young people do not think about the wider consequences of their personal actions. However in this case it can cost someone else their health and even their life."

The researchers say a drug lab is often a temporary set-up, used for a brief period and abandoned without any attempt at safe, scientific clean-up. The operation is then moved to another temporary location, causing spreading contamination across the community in new locations every few months.

The volatile toxic chemicals used in making drugs do not disappear when drug-making ceases on site. They find their way into soil, air and water; however, not enough research has yet been done into this problem to accurately assess the wider impact on community or environmental health, Professors Naidu and Mallavarapu caution.

"We do know that over five kilos of toxic waste are generated for every kilo of methamphetamine drug produced," says Professor Naidu. "Local residents can unknowingly be exposed to and endangered by this toxic waste through inhalation, skin absorption or by drinking contaminated water."

"Primary contaminants of concern from these drug labs include known carcinogens like benzenes, and other toxins such as methylene chloride, trichloroethane and toluene."

"Individuals who are exposed to drug lab contamination may experience dizziness, headaches and reactions, chemical burns, lung damage, and nerve damage," he adds.

The most at-risk populations are drug 'cooks', and subsequent residents or neighbours of labs - but police, fire fighters, environmental inspectors and other public servants may also be exposed.

The researchers have investigated the potential for the drugs to leach into the ecosystem and found that the chemicals and their byproducts can persist in the environment for many years, posing a continuing hazard to water quality and wildlife.

"Where this occurs, it means that people living on the site or nearby may be exposed over a number of years and there needs to be further research into bioaccumulation to assess the risk," says Prof. Naidu.

"Preventing clandestine drug manufacturers from dumping their wastes is a challenging task given the extreme secrecy under which these labs operate. Effective legislation and tougher penalties for the 'cooks' may help to reduce the number of illicit labs in operation, but it would also help if young people who buy these drugs were more aware of their impact on others and on the environment."

The researchers add that the ability of scientists to chemically 'fingerprint' different drug-making operations are making it easier to nail the culprits, as they themselves will be contaminated by their own distinctive brew.

Letting celebrities get away with drug crimes is sending out the wrong message to 'impressionable' young people, a UN report warned Wednesday.
Advertisement
Advertisement