Multiple Sclerosis Patients Skeptical Of The Efficacy Of Disease-Modifying Drugs 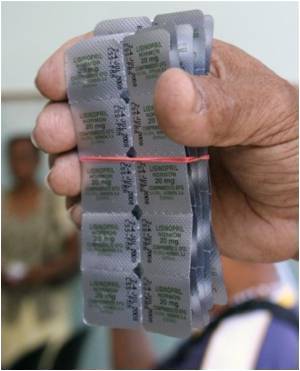 Many multiple sclerosis (MS) patients tend to be skeptical of the efficacy of the Disease-modifying drugs (DMDs). These are injected to slow the progression of MS, and have been shown to reduce the frequency and severity of relapses. But according to a new study led by St. Michael's Hospital and the Institute for Clinical Evaluative Sciences (ICES), adherence to all DMDs is low, with less than half of patients, or 44 per cent, continually adherent after two years.

"There are a number of reasons why adherence to therapies of proven value might be low," says Dr. Paul O'Connor, director of the MS Clinic at St. Michael's Hospital. "These drugs don't work in everyone and some patients may stop them because they don't feel they are experiencing benefits. In some cases, patients may stop treatment because of side-effects. It is important that patients understand the need for continuing treatment in order to prevent some of the long-term consequences of MS."

The study, published in the May edition of The Canadian Journal of Neurological Sciences, aimed to determine differential adherence to these drugs in Ontario given that they are each marketed as differential efficacy, side effects, or convenience.

682 Ontarians filling prescriptions through Ontario's Public Drug Programs were newly treated with a DMD for MS between April 2006 and March 2008
Advertisement
Although DMDs differ with respect to frequency of injection, costs and side-effect profiles, there is no indication that adherence to these medications varies substantially in Ontario

Despite their efficacy, adherence to all DMDs is low, with less than half of patients (44 per cent) continually adherent after 2 years.

"This study shows that adherence to treatment with DMDs is low, which is concerning given their proven effectiveness in slowing the progression of MS. We need to increase the appreciation of the long-term benefits of these medications to ensure that MS patients are receiving the best treatment available," says co-author Tara Gomes, an epidemiologist at ICES.