Mother's stress before giving birth may accelerate her child's biological aging, according to a new study. The findings of the study are published in the journal Psychoneuroendocrinology.

The researchers discovered proof that maternal stress adversely affects a baby's telomeres' length, the little pieces of DNA at the edges of chromosomes that serve as protective caps, like the plastic tips on shoelaces. Shortened telomeres have been linked to a raised risk of cancers, cardiovascular and other diseases, and earlier death.

While many studies have reported that telomere length is shorter in newborns whose mothers recorded high stress through either the first or third trimester of pregnancy, this new research tracked maternal stress before conception and followed up in the second and third trimesters. The researchers identified a significant period in the third trimester, but not earlier, through which children are at greater risk for shortened telomeres.


‘Research shows that maternal stress adversely affects a baby's telomeres' length.Shortened telomeres have been linked to a raised risk of cancers, cardiovascular and other diseases, and earlier death.’


Overall, the study observed 111 mothers and their children from pre-conception into early childhood. Children between the ages 3 and 5 provided cell samples from inside their cheeks. Researchers extracted DNA, including telomeres, from the samples. The team then compared childhood telomere length with the stress measurements they had taken while the kids were in utero.

Carroll said, "This allows us to ascertain the contribution of stress at each of these times on the child's telomere length." "Past research looked at newborn telomere length, and our conclusions look years later when the child is 3 to 5 years old. We see proof into childhood that telomere length continues to be shorter in those children exposed in utero to maternal stress. We think this finding is quite notable."

"We know that stress can stimulate inflammation and metabolic activity, both of which, in high amounts, can add to damage to DNA. Telomeres are exposed to damage and, if unrepaired before cell division, they can become compressed by this damage. During in utero development, we recognize there is rapid cell replication, and we suspect there is heightened vulnerability to damage during this time," Carroll stated.

A second UCLA-led research from the same study group discovered that women suffering from high stress through the months and even years before conception defined as feeling overwhelmed and unable to cope had shorter pregnancies compared to other women. Women who encountered the highest stress levels gave birth to infants whose time in utero was shorter by one week or more.

The researchers discovered that women who were exposed to the lowest or highest amounts of stress in their surroundings had the shortest pregnancies. In contrast, women who had a moderate level of environmental stress before conception had the most prolonged pregnancies.

Carrol stated, "An important takeaway from this work is that prenatal and pre-conception maternal health and well-being are critically vital for the health of the infant." "If we as a society can make adjustments to help give pregnant women the support they need and provide them with a safe and supportive atmosphere before and during pregnancy, we may have a meaningful impact on their childrens health."

COVID-19 and Pregnancy: What Women Need to Know
Pregnant women should practice public health measures that have been recommended and be mindful about whom they are exposed to. They should take extra precautions to safeguard their health and that of their child's.
READ MORE 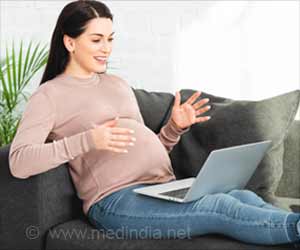 Simple Tips for Pregnant Women during COVID-19 Pandemic
COVID-19 Pandemic: Staying at home can help pregnant moms to avoid coronavirus infection safely. However, telemedicine can minimize unnecessary travel to the hospital and help expecting moms to stay in touch with their physicians.
READ MORE