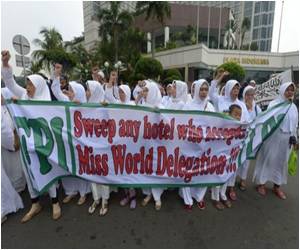 Following days of protests regarding the change of venue, Miss World beauty pageant has finally begun with tight security on the Indonesian resort island of Bali.

As contestants put on dance performances at a glittering opening ceremony, around 100 police, including some armed with rifles, patrolled around the building where the contest is being held on the south of the island.

Hundreds of police have been deployed at hotels and venues linked to the pageant, which has caused anger in the world's largest Muslim-majority nation.


Thousands of Islamic hardliners have taken to the streets across the country during the past week, denouncing the show as "smut and pornography" and burning effigies of the organisers.
Advertisement
But the anger has not been limited to radicals, with criticism also coming from the country's most prominent Muslim clerical body, rights groups, and a government minister.

Organisers pledged months ago there would be no bikini round during this year's pageant in a bid to avoid causing offence.

However, this was not enough to stop street protests, and on Saturday the government bowed to the mounting pressure by deciding to move the final, on September 28, to Hindu-majority Bali.

It had originally been scheduled to take place just outside the capital Jakarta, in an area where there is considerable hardline influence, but radicals threatened to stage huge protests and get it stopped.

Although Bali has been hit by deadly bomb attacks in the past, hardline influence is almost non-existent on the island nowadays and locals are used to seeing hordes of tourists sunbathing in their swimwear.

Announcing the change of venue, coordinating minister for people's welfare, Agung Laksono, said the government had "listened to what the people wanted".

The organisers said they were "disappointed" by the decision.

"There is the potential that we will be seen as a country which always bows to pressure from a noisy Muslim minority group," Arief Suditomo, from the local organising committee, told AFP.

While most of Indonesia's population of more than 240 million practises a moderate form of Islam, the influence of the hardline fringe is growing and they have succeeded in getting events changed or cancelled in the past.

Last year, pop sensation Lady Gaga axed a concert after a series of protests, where radicals dubbed her "the devil", threatened to burn down the venue and criticised her for wearing only "a bra and panties".

Miss World Celebrates 60th Birthday
Miss World homecoming to Britain, with all its glitz and glamour, for the global beauty contest to ....

Countdown to Miss World Finale Starts in London
The Miss World whirlwind whipped into London on Monday, with beauty queens from across the globe ......