Miscarriage in a Washroom 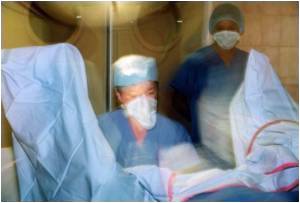 Lack of timely treatment causes a woman to suffer miscarriage in a toilet, after she waited two hours in the emergency department of Melbourne's Frankston Hospital.

Being 10-12 weeks pregnant with complaints of pain and bleeding, Tracey Lake was referred by her GP to the emergency care at Frankston hospital. The doctor had also spoken with the emergency department explaining her case and the high risk of miscarriage.

Despite the communication and the emergency nature of her case, no medical specialist attended on Tracey.


She went to the toilet where she suffered a miscarriage. Two hours after her miscarriage in the washroom, a doctor finally attended on her.

An investigation has been ordered by the Health Minister.

Human uterus seems to be highly selective when it comes to accepting embryos, for a new study has shown that women with less 'fussy' uteruses may be at higher risk of miscarriage.
Advertisement

Erythroblastosis fetalis occurs due to Rh incompatibility between the mother and the fetus, resulting in ...

What is incompetent cervix? Know more about its facts, symptoms, causes and also about the method of ...

Maternal mortality or maternal death refers to the death of a woman occurring during her pregnancy or less ...

Abortion is the termination of pregnancy. It is done either by removal (surgically) or expulsion of the ...

New research indicates that too much stress could lead to miscarriage. What are the risk factors to avoid? ...
This site uses cookies to deliver our services.By using our site, you acknowledge that you have read and understand our Cookie Policy, Privacy Policy, and our Terms of Use  Ok, Got it. Close
×