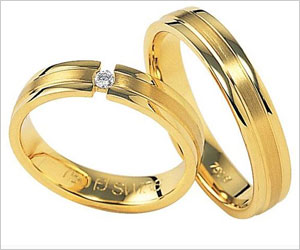 Married men who wear their wedding rings have a higher chance of luring women towards them, a new survey has found.

IllicitEncounters.com, UK's largest dating site for married people, conducted a survey on 2,000 members, and found that 87 percent of men still wear their wedding bands while looking for an affair, which actually works, as 68 percent of women members found such men to be sexually more appealing, the Daily Star reported.

In South Korea, thousands of Unification Church members were married in a mass wedding -- only the second such event since the death of their messiah and controversial church founder Sun Myung Moon.
Advertisement

Mike Taylor, spokesperson for the website said that today's ambitious female lot don't generally look for something serious and men with ring give them the opportunily to indulge in an affair without commitment.


Karen, a member of the dating site added that the situation was similar to that of 'wanting what you can't have,' which made married men "extremely attractive to women."

Meanwhile, the tables turned when it came to women, as 73 percent of female members confessed to have taken their wedding rings off while spending time with their secret lover.

An American woman suffered a rare phenomenon in which she forgot about her first wedding but remarried her husband 10 months later.
Advertisement
<< Microwave That Now Counts Calories!
Hand Hygiene Among Health-care Workers Improved in Presence... >>

More News on:
Pheromones How to Save your marriage