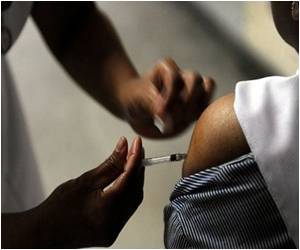 Vaccines for measles were not linked to an augmented risk of febrile seizures between 4 and 6 year olds during the six weeks after vaccination, states study by the Kaiser Permanente Vaccine Study Center that appears in the current issue of Pediatrics. Funded by the U.S. Centers for Disease Control, the study of 86,750 children follows an earlier study published in Pediatrics that showed one particular combination of measles-containing vaccine  the measles, mumps, rubella and chickenpox containing vaccination (or MMRV)  was associated with an increased risk of febrile seizures in 1-to-2-year-old children, compared with same-day administration of the separate vaccine for MMR (measles, mumps, rubella) and the V (varicella) vaccine for chicken pox. This new study sought to evaluate, for the first time, the risk of febrile seizures following MMRV or separate MMR plus V vaccines among 4-6 year olds and found no increased risk of febrile seizures, said study lead author Nicola Klein, MD, PhD, co-director of the Kaiser Permanente Vaccine Study Center.

In the United States, children receive two doses of measles, mumps,rubella and varicella vaccines  the first between 1-2 years and the second between ages 4-6. Among 1-2 year olds, the risk of febrile seizures 7-10 days after MMRV was double that of separate MMR+V. For children aged 4-6 receiving their second dose, no such association was found with either measles vaccine combination, according to Kaiser Permanente researchers. A febrile seizure is a brief, fever-related convulsion, but it does not lead to epilepsy or seizure disorders, researchers explained. This study of 4-6 year olds analyzed 86,750 children aged 48-83 months old from seven participating Vaccine Safety Datalink sites between January 2000 and October 2008 who received either MMRV; separately administered, same-day MMR plus varicella; or MMR or varicella vaccines alone.


"The results provide reassuring evidence that neither MMRV, nor MMR plus V, appear to be associated with an increased risk of post-vaccination febrile seizures in this 4-6 age group," said Klein.Febrile seizures typically occur in children between the ages of 6 months and 5 years, with the incidence peaking at approximately 18 months of age, explain the researchers. "As febrile seizures are generally much less likely to occur among 4-6 year old children, it is not surprising that we did not detect increased febrile seizures following MMRV or MMR plus V among 4-6 year old children," Klein said. This study builds on the work of a previous study published in Pediatrics in June 2010 that showed that the combination vaccine for measles, mumps, rubella and chickenpox (MMRV) is associated with double the risk of febrile seizures for 1-to-2 year-olds compared with same-day administration of the separate vaccine for measles, mumps, rubella (MMR) and the varicella (V) vaccine for chicken pox.

Mumps is a contagious viral infection that typically causes a painful swelling of one or more of the salivary gland. Mumps most commonly occurs in children aged 2-12 years who have not been vaccinated against the disease. However, it can occur at any age. It was a common childhood disease before the development of the mumps vaccine (MMR vaccine).
Advertisement
"While this earlier study and the resulting CDC recommendations are very important and ones our pediatricians follow, it is also important to emphasize that it is more common for a child to have a febrile seizure caused by a simple cold than by an immunization. And though febrile seizures are a very scary event for a family, they are not dangerous and do not lead to later epilepsy or seizure disorders," said Randy Bergen, MD, a Kaiser Permanente pediatrician and infectious disease specialist at Kaiser Permanente Walnut Creek Medical Center. FThe Vaccine Safety Datalink project is a collaborative effort among CDC's Immunization Safety Office and eight managed care organizations: Kaiser Permanente Northern California, Kaiser Permanente Southern California, Kaiser Permanente Colorado, Kaiser Permanente Northwest, Health Partners (Minn.), Group Health Cooperative (Wash.), Marshfield Clinic (Wisc.) and Harvard Pilgrim Health Care (Mass.).

The VSD project was established in 1990 to monitor immunization safety and address the gaps in scientific knowledge about rare and serious events following immunization. The VSD shares electronic health records from the organizations' health systems. MMRV was licensed by the FDA in 2005 and subsequently recommended by the Advisory Committee on Immunization Practices in 2006. Although pre-licensure studies of MMRV among 1-2 year olds noted higher rates of fever and measles-like rash one to two weeks post vaccination when compared with separate MMR+V, it was unknown at the time of MMRV's licensure whether a higher rate of fevers was similarly associated with increased risk of febrile seizures.

In February 2008, Kaiser Permanente researchers alerted the CDC's Advisory Committee on Immunization Practices to preliminary evidence of an increased risk of febrile seizures following MMRV for 1-2 year olds, findings which were subsequently confirmed in the 2010 study published in Pediatrics. "The Vaccine Safety Datalink  which we used to conduct both the study of 1-2 year olds and the study of 4-6 year olds, is a premier example of how different managed care organizations can leverage their electronic medical records to improve vaccine safety and monitoring," Klein said.

Uv rays can stop the spread of chickenpox which means that people in milder climates are at a higher risk of the disease.
Advertisement
Advertisement

Seizure or a convulsion is a result of abnormal electrical activity in the brain. If there are two or more ...

Focal or partial seizures are abnormal localized electrical discharges in the brain. They are of two types ...

Vaccines are biological products that impart immunity to the recipient. Vaccines may be live attenuated, ...