Many Oz Girls Not Returning for Cervical Cancer Vaccine 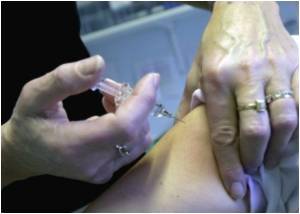 New figures released by the Australian government have shown that the number of girls between 12 to 13 years of age returning for their second and third doses of their cervical cancer vaccinations has declined.

More than 83 percent of girls between 12 to 13 years had appeared for the first dose of the vaccine Gardasil but the number fell to 80 percent for the second vaccine while just 73 percent returned for the third dose.

Australian Capital Territory had the highest percent of girls taking all three doses at 80 percent while Tasmanian girls had the lowest at 64 percent.


"What we're concerned about is that there is a decline after each dose. We're hearing anecdotally that people don't realise three doses are required with this vaccine. Most states and territories are falling short of the minimum 80 per cent coverage health experts say we should be aiming for if we want to see a marked reduction in cervical cancer incidence", PapScreen Victoria manager Kate Broun said.

Cancer is one of the frequently talked about and most feared disease that falls under the genre of lifestyle diseases that have evolved, rather rapidly, in the past two decades.
Advertisement
<< Men Make black and White Judgements
10-Year-Old Oz Boy Set to Undergo Sex Change Op >>

Iron Intake Calculator Accident and Trauma Care Blood - Sugar Chart Hearing Loss Calculator Loram (2 mg) (Lorazepam) Drug Interaction Checker Drug Side Effects Calculator Daily Calorie Requirements Vent Forte (Theophylline) The Essence of Yoga
This site uses cookies to deliver our services. By using our site, you acknowledge that you have read and understand our Cookie Policy, Privacy Policy, and our Terms of Use