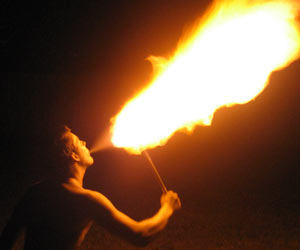 A fire-breathing stunt at the weekly community event in Justins Park at Burleigh Heads, went wrong when flames went down a 20-year-old man's throat.

He was taken to the hospital suffering internal burns after inhaling a fire and kerosene mix.

Burn injuries have reached epidemic proportions in recent years. Burn accident statistics show that at least 50% of all burn accidents can be prevented.
Advertisement
‘The man suffered internal burns and has been placed in induced coma to protect him from airway swelling and to allow for pain relief. ’

The 20-year-old suffered serious burns to his face and airway while trying to light kerosene he had spat out.


"He appeared to inhale the kerosene rather than expel it, and that caused the fire to go down his throat and into his airway. It certainly caused him a lot of pain, and he was in quite a bit of distress," said, Stephen Rashford, Queensland Ambulance Service medical director.

One-year-old Elijah Mole, immediately began to choke after drinking oven cleaner when his father Jimmy was doing the cleaning.
Advertisement
The man was put in an induced coma to protect him from airway swelling and to allow for pain relief, said Dr Rashford.

The accident happened on December 20 at a Burleigh Heads park where fire twirlers regularly perform. The man was later transferred to the Royal Brisbane and Women's Hospital.

Fire safety arrangements continue to be poor in a majority of commercial establishments in Odisha, leading to the death of 40 people in 2014.
Advertisement
<< 8-Year-Old Quadruple Transplant Recipient Meets Family of 5-...
Green Corridor Helps 35-Year-Old Man To Get Heart From Brain... >>

The STF probe found that the fires were started by the staff of the department to destroy some evidence of wrongdoing.

Alarming Cesarean Section Trends in India - Convenience or Compulsion of Corporate Healthcare
View all
News Archive
News Resource
News Category
Is There a Link Between Heart Failure and Y Chromosome in Men? Male Contraceptive Pills Show Promise Common Prostate Cancer Drugs Were Less Safe: New Study Taller Than an Average Man: May Have High Risk of Testicular Cancer Do Men Infected With COVID-19 Have Semen Problems Like Infertility?
More News
Sign up for Wellness Consult a Doctor Sign up for Selfcare